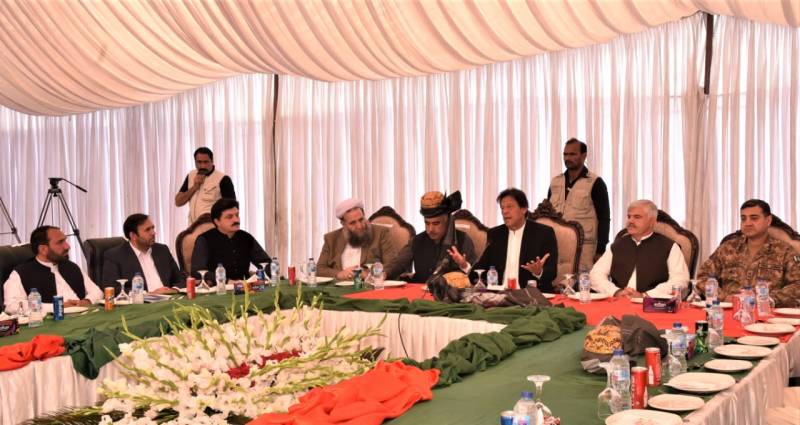 Addressing tribal elders at the Headquarters of Mohmand district, Ghalanai, the premier said people of tribal districts will benefit from the Sehat Insaf Card like rest of the citizens.

He said the holder of the card will be entitled to get treatment in any hospital up to seven hundred and twenty thousand rupees annually.

According to Radio Pakistan, the prime minister opined that tribal districts will be developed and education and job opportunities will be created for the youth.

The Prime Minister Mohmand Dam will be constructed which will not only generate electricity but also irrigate a vast barren land.

Imran Khan said tourism will also be promoted in tribal districts. He said Khyber Pakhtunkhwa has great potential for tourism and this has helped in reduction of poverty during the last five years.

Earlier, speaking at a briefing at Ghalanai, the Prime Minister directed to ensure equitable distribution of funds for the development projects meant for tribal districts merged with Khyber Pakhtunkhwa. He said these projects should be ensured corruption free.

The meeting reviewed the steps taken regarding administrative reforms, people's representatives, local bodies' system, public welfare and development projects. It was also briefed about Federal Government's roadmap regarding these measures.