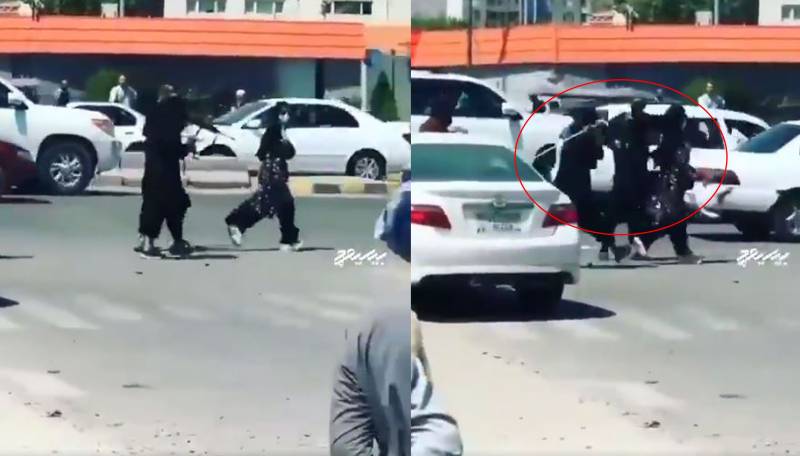 KABUL – Taliban fighters spotted lashing a woman who can be seen crossing a busy street in an Afghan city despite the new Afghan setup has promised to end the hard-line social rules.

Former deputy speaker of the Afghan parliament Fawzia Koofi shared the clip in which a girl donning a black and white outfit, with a headscarf, and a face mask could be seen crossing a busy road while two Taliban members could be seen following her.

One of the fighters then ran towards her and lashed her with a cane, while the other one could be seen toting an assault rifle while chasing her as the scared woman could be seen running away from the two.

As the clip started doing rounds on social sites, people mentioned the former regimes of the Taliban in which they used whips and sticks against women.

The incident also questioned the promises made by Taliban political leaders who vowed to uphold women's rights and said they would allow them to work and attend educational institutions.

KABUL – Women in Afghanistan will not be allowed to play cricket or any sport under the new administration, the ...

Earlier, Taliban spokesman Suhail Shaheen has clarified that the group will not force women to wear the full burqa instead, the hijab would be compulsory. “The burqa is not the only hijab that can be observed, there are different types of hijab not limited to the burqa”, the spokesman for the group's political office in Doha said.

Taliban earlier announced that women can get education from primary to higher education including university. We have announced this policy at international conferences, the Moscow conference and here at the Doha conference, the spokesperson said.

Meanwhile, United Nations High Commissioner for Human Rights Michelle Bachelet alleged the Taliban for breaking their promises on women’s rights and inclusivity in Afghanistan as she also criticised violence against protesters and alleged reprisal killings.