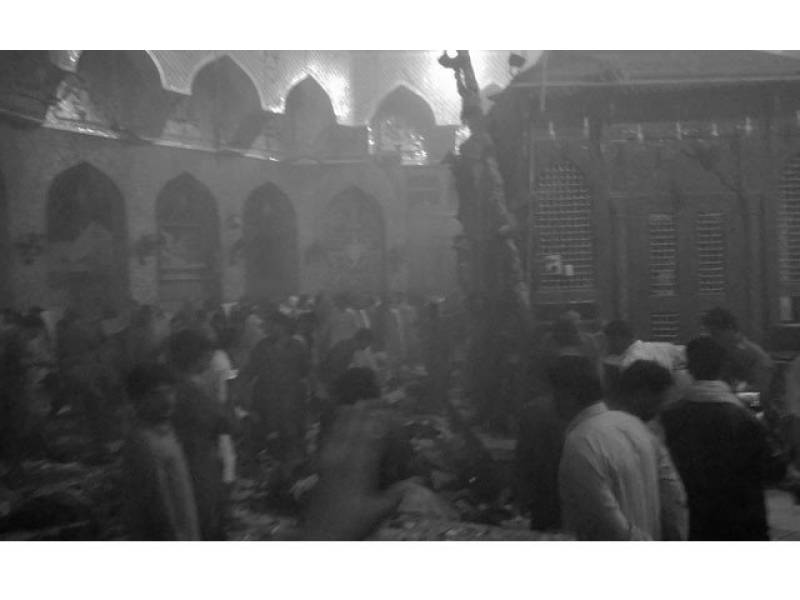 JAMSHORO - The death toll from a massive blast at Lal Shahbaz Qalandar shrine in Sehwan Sharif soared to 90 as more victims succumbed to injuries here on Friday.

A stampede followed the blast in the premises of the shrine where a large number of devotee, including women and children, were present.

Rescuers shifted the bodies and injured to nearby hospitals and as per multiple reports as many as 273 were left injured. At least 73 wounded are still in the hospitals, DG Health told media here on Friday.

Contingents of police have reached the shrine that is situated slightly off the Super Highway in Sindh province. Hundreds of people gather at the Sufi saint's shrine every Thursday for religious rituals.

Chief Minister Sindh Syed Murad Ali Shah directed the senior civil and police officials of the district to reach the shrine. An emergency has been declared in the hospitals of the area.

Sehwan in Jamshoro is the constituency of Sindh CM.

According to the police, it was a suicide attack.

Army Chief General Qamar Javed Bajwa has directed the army command in the province to provide assistance to the civil administration in rescue activities and treatment of the injured in CMH Hyderabad.

Condemnations are following the terror attack, with politicians expressing their grief over the loss of precious lives and injuries to others.

Earlier on Thursday, three soldiers embraced martyrdom after a improvised explosive device (IED) went off when a convoy of Pakistan Army was passing from Awaran area of Balochistan.

During this week, Pakistan has witnessed a series of terror attacks in Lahore, Peshawar and other parts of the country.

On Monday, a suicide bomber struck Lahore's Mall Road near Charing Cross where a protest was underway, killing 16 people and injuring more than 80 others. Jamaat-ul Ahrar, a splinter group of the banned TTP, claimed responsibility for the blast.

Two days after the Lahore hit, the same terrorist outfit targetted a judges' convoy near Hayatabad Medical Complex in Peshawar, Khyber Pakhtunkhwa, killing one person and injuring 18 others.

Last year, on November 12, at least 62 people were killed and 102 were injured injured after a bomb went off in the crowded Shah Noorani Shrine in Hub town of Balochistan’s Lasbela district. The militant organisation, Islamic State (IS), claimed responsibility for the attack, according to international news agencies.