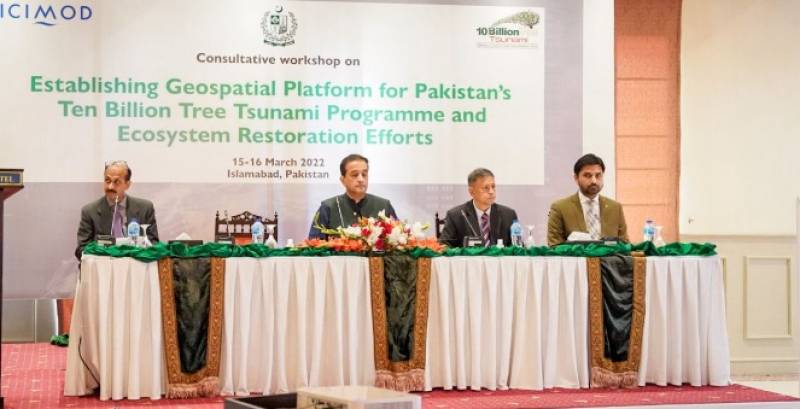 ISLAMABAD – Special Assistant to the Prime Minister (SAPM) on Climate Change Malik Amin Aslam on Tuesday announced that the Ministry of Climate Change would launch State of the Forest Report annually, based on satellite monitoring to reveal change analysis of plantation sites after massive plantation and afforestation.

Addressing the two-day consultative workshop on establishing geospatial platform for Pakistan's Ten Billion Tree Tsunami Plantation (TBTTP) project, he said it was an historic day as International Centre for Integrated Mountain Development (ICIMOD) after collaborating with the Ministry for the flagship TBTTP project's geospatial monitoring added another layer of transparency and credibility for the initiative.

Amin said due to the green vision of Prime Minister Imran Khan the country was declared forestry champion and leader in forestry initiatives at the global level and the United Nations Environmental Assembly made Pakistan one of the members of its eight-member body.

"The world has acknowledged the ecosystem and biodiversity conservation vision of Prime Minister Imran Khan through the TBTTP as a leadership model and direction", he said.

The SAPM informed that the country has achieved the target 1.5 billion trees target under TBTTP project. He mentioned that the Billion Tree Afforestation Project (BTAP) was the only government initiative that saved Rs 8 billion of national exchequer and achieved beyond it's set target.

He thanked the ICIMOD for their collaboration and remakred that the Centre was longstanding partner of the country in biodiversity conservation in the northern areas of the country.

The SAPM mentioned that the workshop would help develop capacities of the provincial Forest Departments to work on geospatial monitoring technology.

The Ministry had carried out satellite monitoring of 70 selected sites of TBTTP that revealed 60% positive change after plantation on the sites.

Gymatsho underlined that the BTAP project was a great example of ecosystem restoration. The Centre was committed to enhance national capacities in environmental and biodiversity conservation endeavours which would bring change in the lives of people living in Hindu Kush Himalayan region.

He also congratulated the SAPM on TBTTP project's success and commended it as a model initiative.

The collaboration with ICIMOD would help improve the TBTTP reporting through geospatial data, he added.

He said the extreme natural events due to climate change incurred heavy economic losses of over Rs365 billion to the country.

The TBTTP project was leading the country towards a climate resilient country.

Chief of Party ICIMOD Birendra Bajracharya also addressed the workshop and expressed his views on the subject.

The provincial project directors and coordinators under TBTTP from all the federating units including Azad Jammu and Kashmir and Gilgit Baltistan were participating in the two-day workshop to equip the Forest Department officials with technical skills on using geospatial data with accuracy.