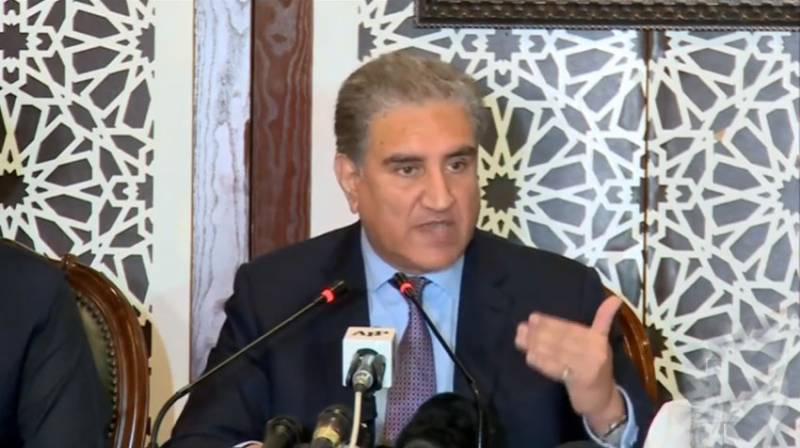 Addressing a press conference along with Director General Inter-Services Public Relations (ISPR) Major General Asif Ghafoor, Advisor to PM on Information and Broadcasting Firdous Ashiq Awan and Chairman Kashmir Committee Syed Fakhar Imam, he said the highest forum of the world, had reaffirmed its commitments to its eleven resolutions over IoJ&K.

The minister said the UNSC had held deliberation with complete consensus despite botched attempts by  India to interrupt its session.

With its deliberations, the UNSC had clearly rejected the Indian point of view and endorsed  Pakistan's stance as indicated in August 13 letter, he added.

Terming the UNSC meeting on Kashmir as a big diplomatic victory for  Pakistan and clear defeat to designs of  India, he said today's  India did not belong to Nehru but to Modi and there was a clear difference between the two.

Qureshi cautioned that the situation was still evolving and  Pakistan would take all steps to remind the world body about the irresponsible, illegal and unilateral steps taken by the Modi led government.

He said Kashmiri and Pakistani leadership had already completely rejected Indian stance and now even voices inside  India were being raised by the civil society and academia strongly opposing the steps taken by the Indian government.

About 200 famous people from civil society and human rights activists had signed the petition demanding the Indian government to undo the coercive steps in IoK, besides Indian Supreme Court was also approached, he added.

The minister informed that in today's meeting of the Special Kashmir Committee, representation was given to the Opposition parties who had participated and gave their valuable input.

He maintained that a message of uniformity and harmony was given from the Pakistani nation, politicians, parliament and Azad Jammu and Kashmir leadership.

A message of unity had been sent across the globe over the Kashmir issue, he added.

He said that they had decided to further enhance their lobbying efforts to effectively highlight the prevailing situation in Occupied Kashmir.

He said it was decided to establish a Kashmir Cell in the Foreign Office besides similar desks at Pakistani embassies in the key capitals across the world to give impetus to the ongoing efforts also cautioned the international community that India could carry out any false flag operation near the Line of Control (LoC) to divert world attention from its unilateral and illegal actions and serious human rights violations in IoK.