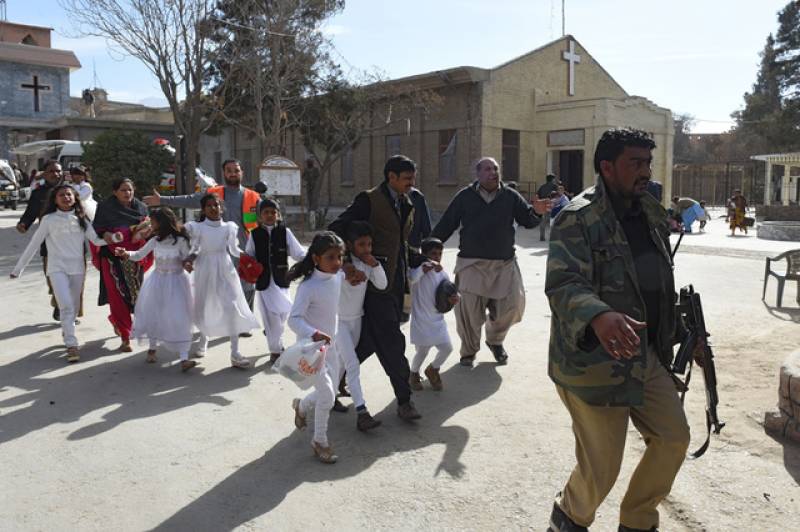 QUETTA - A suicide attack on a church in the Pakistani city of Quetta has left at least nine people dead, authorities said on Sunday.

"One bomber was killed at the main gate of the church while another exploded himself inside the religious place," the minister added.

"The operation has not yet concluded. We are searching for the remaining terrorists," he said.

Bugti said the suicide bombers were also reportedly carrying weapons. FC and police personnel shot one of them dead before he could enter the church.

The minister said around 300-400 people are usually present in the church on Sundays. Ministry of Foreign Affairs Spokesperson Mohammad Faisal condemned the attack.

Attack of terrorists on Zarghoon road church in Quetta is condemned. Pakistan’s resolve against terrorism cannot be deterred by these cowardly acts.

He shared on Twitter: "Attack of terrorists on Zarghoon road church in Quetta is condemned. Pakistan’s resolve against terrorism cannot be deterred by these cowardly acts.

A large contingent of police and Frontier Corps (FC) personnel surrounded the attack site and were conducting a search operation. A bomb disposal team was also on standby.

An emergency has been declared in the city's hospitals.

No terrorist group has claimed responsibility for the attack.

In a separate message, Abbasi said the whole nation was united in the fight against terrorism and had the determination to confront it. He praised the security forces for their prompt response, the PM office media wing said in a press release.

Abbasi also expressed his sympathies with the victims’ families and wished for early recovery of the injured.

President Mamnoon Hussain also expressed the strong resolve against terrorism, saying that it could not be weaken by cowardice terrorist acts. The terrorists would be taken to their logical end, he added.

Mamnoon also directed for provision of best medical treatment to the injured, said a press release.

'An attempt to cloud Christmas celebrations'

“Quetta church attack targeting our brotherly Christian Pakistanis is an attempt to cloud Christmas celebrations / create religious cleavages. Effective response by LEAs is commendable. We stay united and steadfast to respond against such heinous attempts” COAS.

The COAS commended the effective response by law enforcement agencies, adding, “We stay united and steadfast to respond against such heinous attempts.”