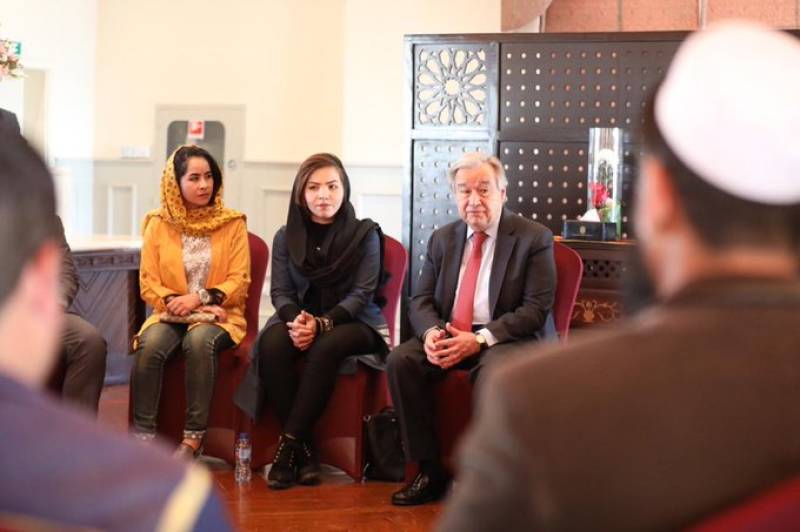 ISLAMABAD – UN Secretary General Antonio Guterres on Monday said the United Nations was ready to participate in Afghanistan’s reconciliation process along with other stakeholders for durable peace and stability.

“The UN is totally at the disposal of Afghans and other actors in order to participate in the peace process and to help it consolidate,” the UN chief said at a joint press conference along with UN High Commissioner for Refugees Filippo Grandi and Foreign Minister Shah Mehmood Qureshi, after they participated in the Refugee Conference, marking 40 years of Pakistan’s hosting of Afghan refugees.

Antonio Guterres said the UN’s role in the peace talks with assistance of other organizations would be in the Afghan-led and Afghan-owned process of reconciliation.

“It is clear that peace among the key Afghan actors is an absolute must in order to fight terrorism because in pretext of terrorism, the conflict prevails,” he said.

He said the UN Office of Counter-terrorism was entirely at the disposal of Afghans and other stakeholders for its role in this regard.

Pakistan has stood in solidarity #WithRefugees from Afghanistan for 40 years — showing how generosity is not always proportional to wealth.

Guterres said in a world where refugees get stigmatized, Pakistan opened its heart for Afghan refugees and called upon the international community to support Pakistan “very meaningfully” for its generous hospitality.

“I am encouraged by Pakistan’s strong commitment to work towards efforts to resume conditions conducive for Afghanistan’s development,” he said.

He mentioned the courage and resilience of displaced Afghans, saying they had a chance to peace and “we have no right to miss this opportunity”.

He urged the international donors to see Pakistan as an essential partner in the construction and peace in Afghanistan.

Asked about the future of Afghan youth born in Pakistan, the UN chief said the UNHCR doctrine always emphasized on voluntary repatriation.

Besides the issue of refugees, he said the governments of Pakistan, Iran and Afghanistan needed close cooperation in order to address the problem of migration.

To a question on India’s denial to accept UN as mediator on Kashmir issue, he said “every conflict must be resolved with diplomacy and dialogue….and the human rights and fundamental principles must be observed anywhere.”

He mentioned that a new realization emerged between Afghanistan and Pakistan to co-exist and support each other on ways to attain sustainable peace. However, he stressed that there was a need to be aware of spoilers, both inside and outside, to defeat their nefarious designs.

The foreign minister said Afghans were the main decision-maker about the future of their country. “There is no military solution to this conflict and an intra-Afghan dialogue is important to lead towards better results,”he said.

On return of Afghan refugees, he said “We want them to go back to their homeland, for which we will facilitate them and continue to be responsible in fulfilling this obligation.”

Qureshi said Afghan refugees were the ‘most natural ambassadors’ to make linkages between the two countries as many of them were born, groomed and educated in Pakistan.

He mentioned that Pakistan was not making discriminatory treatment to needy patients under its social welfare programme.

He recalled organizing a global refugee forum by UNHCR in Geneva and launch of a platform to rally more support for solutions.

He strongly appealed to the donors to mobilize resources for Afghan refugees with first and foremost goal of their return.

Grandi expressed concern that 37 percent of migrants in Greece were Afghan youth, who could be empowered to make peace.

“The Afghan government has to give them confidence of a future offering peace, security and opportunity,” he said.

The press conference was preceded by the Refugee Summit held in collaboration by the Government of Pakistan and the UNHCR that discussed solutions for rehabilitation and repatriation of Afghan refugees as Pakistan marked 40 years of hosting refugees.