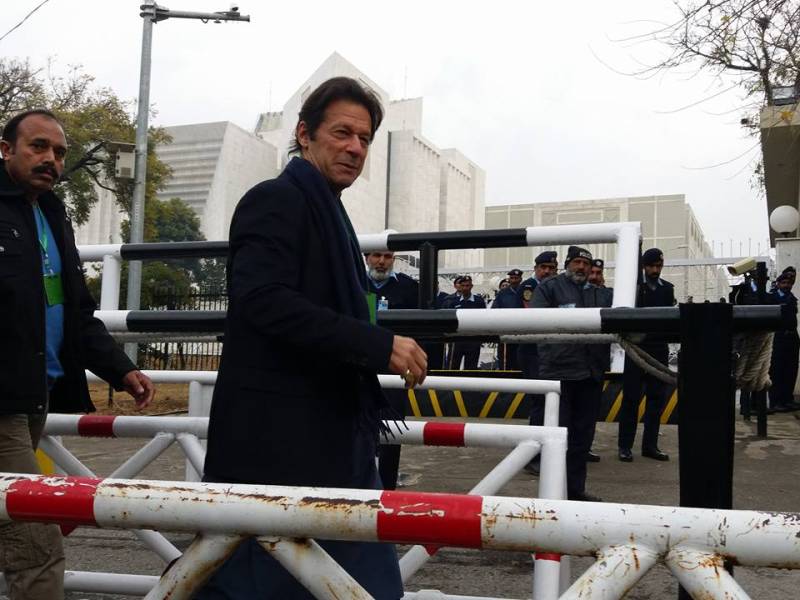 ISLAMABAD - The Supreme Court of Pakistan adjourned hearing a slew of petitions seeking a probe into Panama papers till Wednesday.

According to media reports, prime minister Nawaz Sharif sought immunity from the apex court in context to his conflicting statements on the basis of article 248 of constitution.

PM's daughter Maryam Nawaz Sharif also submitted her reply in the apex court which stated that she was not dependent on her father ever since she got married in 1992.

In her reply, she stated that expenditures for Shamim farm house were paid jointly and her share in tax returns of Shamim Akhter in 2013 was Rs. 5 million while it was Rs. 6 million for subsequent years, 2014 and 2015.

She detailed that out of 384 kanals of Shamim Agri farms, 364 kanals were being supervised by her grandmother Shamim Akhter.

PM's counsel Makhdoom Ali Khan argued before the larger bench that article 19 of the constitution ensured freedom of speech to every individual. He reiterated that the premier's speech had no conflict.

To this, justice Asif Khosa replied that he was not demanding for right in terms of freedom of speech, instead he was asking for immunity for the premier.

The apex court remarked that speech made on the floor of the house was used as an evidence against legislators in New Zealand.

Makhdoom went on and maintained that the premier was seeking his right on the basis of article 66  available to every legislator. He referred to the Zahoor Ali murder case and claimed that former prime minister Zulfiqar Ali Bhutto also sought immunity in that particular case.

He argued that the law of wealth tax was scrapped in 2003 and PTI was demanding PM's disqualification on the basis of it after 14 years adding that no case regarding non-payment of wealth tax was underway against Nawaz Sharif.

'No evidence suggesting any link of Nawaz Sharif with Dubai factory was available' said PM's counsel.

Justice Asif Khosa remarked that the apex court was trying to understand an issue adding that article 66 of the constituion does not correspond to individual.

'Who is telling the truth, kids or their father' justice Khosa asked Makhdoom Ali Khan and said that parliament devises law whereas the apex court interprets it.

Justice Azmat Saeed while throwing his weight behind justice Khosa observed that the apex court was reviewing the speech of Nawaz's address to the nation as well apart from his speech on the floor of the house.

Makhdoom Ali Khan in a categoric statement claimed that the premier could not be disqualified even on the basisi of conflicting statements or statements of his scions.

Justice Azmat Saeed remarked that the plaintiffs argued that there was a conflict between statement of premier and his scions.

The apex court has adjourned the hearing till Wednesday (tomorrow).

Earlier, Makhdoom Ali Khan was not allowed to enter the court room by Secretary Bar Association but Makhdoom expressed that he was representing Nawaz Sharif instead of prime minister.

Meanwhile, talking to media outside the Supreme Court PML-N's representative Danyal Aziz slammed PTI supremo and expressed that he would be exposed soon. He claimed that Imran tendered apology before the election commission of Pakistan regarding foreign funding case.

On the other hand, Fawad Chaudhry of PTI said that the counsel for Prime minister Nawaz Sharif was not presenting arguments related to the Panama case.

'Seeking immunity was tantamount to the fact that the premier was accused' said fawad Chaudhry.

During the last hearing, Makhdoom Ali Khan argued that Prime Minister Nawaz Sharif's speech delivered on the floor of the house last year following the Panama leaks has no discrepancies or misstatements and that even if it had, the country's premier has immunity from prosecution.

On this Justice Ijazul Hassan remarked that on one hand the PM's counsel maintained that Nawaz Sharif did not lie on the floor of the National Assembly while on the other he maintained that the PM had immunity.

PM's counsel Makhdoom Ali Khan kicked off his arguments by stating that he would try to wind up debate regarding the conflict in statements and article 62, 63.

He assured the bench of no repetition while clarifying the position of premier Nawaz Sharif and his family. Makhdoom referred to the case of former prime minister Yousaf Raza Gillani who was disqualified in 2012 and added that he was disqualified on the basis of contempt of court.

However, Makhdoom maintained that the apex court could not disqualify prime minister on the basis of verdict related to dual nationality following conflicting statements as they both were different cases altogether.

Justice Azmat observed that the court was reviewing whether Nawaz Sharif could be disqualified on the basis of available documents or not.

PM’s counsel went on and claimed that the apex court only passed an observation against Raja Pervaiz Ashraf and did not disqualify him regarding rental power plant case.

“The apex court could not take action directly on the basis of controversial record,” said Makhdoom Ali Khan.

To this, Justice Azmat Saeed remarked that the court had passed declaration in many cases.

Makhdoom Ali Khan said that there was no conflict between statements of Nawaz Sharif. He maintained that premier’s speech can be reviewed according to the constitution of Pakistan.

Pertaining to the matter of freedom of speech while addressing the National Assembly court also remarked that if Article 66 was part of the Constitution, so was Article 62 (which deals with the morals and character of legislators).

Mentioning Article 184-3 of the Constitution, the larger bench clarified that disqualification cases could be heard by the apex court.

Meanwhile, talking to newsmen outside Supreme Court, PML-N’s representative Danyal Aziz expressed that PTI had no evidence whatsoever to prove their point. He maintained that after Makhdoom Ali Khan, counsel for Maryam Nawaz would be arguing before the larger bench.

“BBC twisted the facts in its story regarding ownership of London flats,” Danyal said in response to a question.

On the other hand, PTI’s leader Naeem Ul Haq slammed the premier and said that he had become skilful in concealing corruption. Fawad Chaudhry while throwing his weight behind Naeem said that the arguments of Makhdoom Ali Khan had no link with the case.