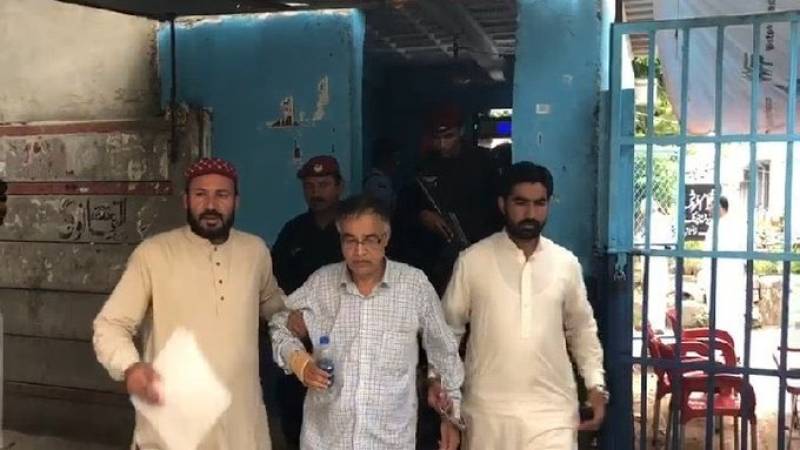 ISLAMABAD – Federal investigators have been granted the custody of Mian Tariq Mahmood, the prime suspect in the accountability judge’s video scandal.

The cybercrime wing of Federal Investigation Agency (FIA) arrested him in Islamabad as he was trying to flee Pakistan.

Mian Tariq is accused of filming the video of Accountability Judge Arshad Malik allegedly to blackmail him.

After he was produced before the court on Wednesday), Civil Judge Shaista Kundi handed over the accused to FIA on two-day physical remand in Islamabad. The court ordered to produce him again on Friday along with his medical report.

His mobile phone, which had an unedited video of the judge, has also been confiscated. Earlier, following the forensic, the video was traced from Mian Tariq’s adobe.

Pakistan Muslim League-Nawaz (PML-N) vice president Maryam Nawaz, who first leaked the video in a press conference earlier this month, reacted to the arrest of Mian Tariq on Twitter:

“Good but will those who blackmailed the judge with the video and made him sentence Nawaz Sharif despite being innocent will also be punished?” she wrote.

In another tweet, she asked will an action be taken against those who leaked Hussain Nawaz’s picture.

The Islamabad High Court (IHC) had on Friday removed accountability judge, Justice Arshad Malik, from his post over the matter of scandalous videotapes released by PML-N leaders on July 6 wherein the judge could be heard saying that the decision against Nawaz was “forced”.

The directives were issued by IHC Acting Chief Justice Aamer Farooq in a letter to the registrar’s office in which asked the latter to inform that Law Ministry that the judge has been relieved of his post and repatriated to his parent department, the Lahore High Court (LHC).

As per Section 5A of the National Accountability Ordinance (NAO), the Law Ministry, with the consent of the chief justice of a high court, appoints judges for special courts, including accountability courts. Apparently, the decision to remove Justice Malik has also been made in light of the aforementioned section.

Judge Arshad Malik had apprised the Islamabad High Court (IHC) that how he was pressurized and blackmailed allegedly by the Pakistan Muslim League Nawaz's (PML-N) activists to get favourable verdicts for their leader Nawaz Sharif in corruption references.

ISLAMABAD – Accountability Court judge Arshad Malik has rejected the allegations against him levelled by Pakistan ...

He had alleged that he was visited by Mian Tariq (an old social acquaintance from when he was serving in Multan as Additional District & Sessions Judge from 2000-2003), who showed him a secretly recorded manipulated immoral video in a compromising position saying that “it is you doing this when you were in Multan”.