PM Abbasi to fly to Turkey for extraordinary OIC summit 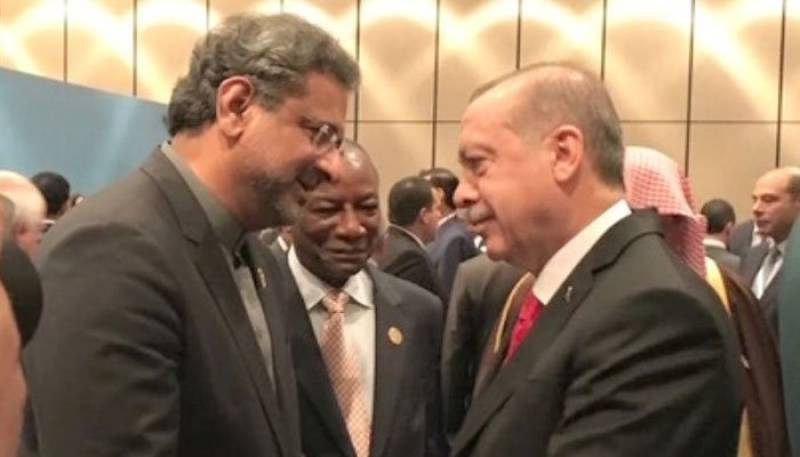 ISLAMABAD - Prime Minister Shahid Khaqan Abbasi will depart for Turkey today (Thursday) to attend a special summit of Organisation of Islamic Cooperation (OIC) summoned in the wake of Palestinians' killings by Israeli forces in Gaza and other cities.

On Tuesday, Ankara urged Islamic countries to review their ties with Israel, announcing an extraordinary summit.

ANKARA/ISLAMABAD - Turkey on Tuesday urged Islamic countries to review their ties with Israel and said it would call an ...

Foreign Office Spokesperson, Dr Muhammad Faisal confirmed during the weekly news briefing in Islamabad that PM Abbasi will be visiting Turkey on the invitation of his counterpart Binali Yildirim.

He said Pakistan believes in a two-state solution of the Palestine dispute and in accordance with the UN resolutions, and that the entire Muslim world is united over this issue.

Earlier, Pakistan has expressed full support for any move of the Organisation of Islamic Cooperation to highlight the plight of the Palestinians, besides deploring the UN Security Council failure to slam brutalities of Israeli forces along Gaza border.

NEW YORK - Pakistan has expressed full support for any move of the Organisation of Islamic Cooperation (OIC) to ...

Pakistan expressed grave concerns over the shifting of the US embassy to Jerusalem from Tel Aviv, a move that mounted tension in the region causing the death of more than 60 Palestinians in Israeli forces’ firing along Gaza border.