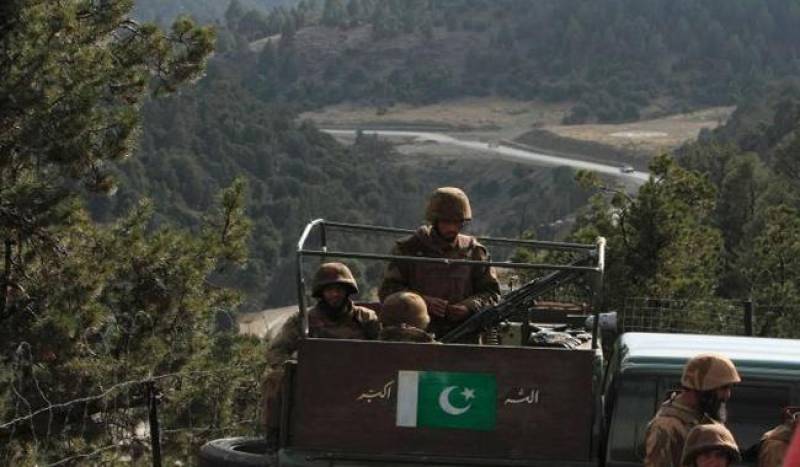 RAWALPINDI -  Following a week of deadly terrorist attacks in the country in which over 100 people were killed, the Pakistan army destroyed four militant hideouts across the Afghan border on Friday.

Pakistan forces attacked the alleged training camp of Jamaat-ul-Ahrar - an offshoot of the Tehreek-e-Taliban Pakistan - located near the Pak-Afghan border and reportedly destroyed the compound and four other hideouts of suspected terrorists.

The reports said that the army targeted Jamaat-ul-Ahrar sanctuaries across the border of Khyber and Mohmand tribal agencies, including the training camp of JuA's commander Adil Bacha.

The move comes hours after the Inter-Services Public Relations announced that the security forces have been given special orders to maintain strict vigilance all along the Pak-Afghan border.

“The border has been closed since last night due to security reasons. No cross-border or unauthorised entry will be allowed into Pakistan from Afghanistan,” read the ISPR statement.

Pakistan-Afghanistan Border closed with immediate effects till further orders due to security reasons.

Just hours before the military operation, the Pakistani army had summoned Afghan diplomats to its headquarters in Rawalpindi and handed over a list of terrorists involved in staging attacks inside Pakistan.

Jamaat-ul-Ahrar which has safe havens in Afghanistan claimed the responsibility for repeated acts of terrorism across Pakistan in the past few days.

Earlier on Friday, Army Chief General Qamar Javed Bajwa held a telephonic conversation with US General John Nicholson, Commander of Resolute Support Mission (RSM) in Afghanistan expressing his concerns over continued acts of terrorism in Pakistan from Afghanistan, the ISPR said in a statement.

"Most of the incidents in Pakistan are claimed by terrorist organisations with leadership hiding in Afghanistan," Gen Bajwa told US General John Nicholson.

"The COAS said that such terrorist activities and inaction against them are testing our current policy of cross-border restraint," the ISPR said in a statement.

The ISPR also claimed to have killed more than 100 suspected militants in intelligence-based operations carried out by security forces across the country, including Punjab, in the past 24 hours.

Pakistan has seen a sudden increase in terror attacks with almost 9 attacks in one week. The attacks are largely being seen as a well-planned and orchestrated attempt of the 'enemies' to destabilise Pakistan as the country makes several breakthroughs and other developments.

On Thursday, at least 88 people were martyred when a suicide bomber attacked the crowded Sufi shrine of Lal Shahbaz Qalandar in Sehwan, injuring up to 343 others, according to DG Health Services Sindh.

On February 15, three suicide bombers targeted Khyber Pakhtunkhwa and the adjoining tribal areas leaving around seven people dead. One of the incidents occurred in Peshawar where a suicide bomber riding a motorbike hit a vehicle carrying civil judges, while two other suicide bombers blew themselves up at separate locations in Mohmand Agency.

Prior to these, a suicide attack in Lahore on February 13 killed 14 people and wounded over 60 others.

On February 12, cameraman Taimur from Samaa News was killed when the channel’s DSNG van was attacked in Karachi.