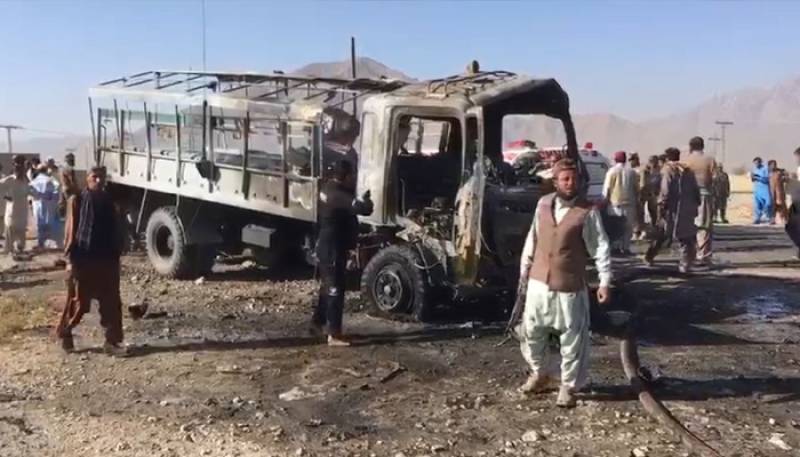 QUETTA - At least seven police officials were killed and 22 injured including civilians after a blast ripped through a police truck in New Sariyab, area of Quetta on Wednesday.

The blast occurred near a truck of rapid response force in which more than 30 troops were travelling on the national highway in the eastern side of Quetta.

According to police, the blast was a suicide attack and around 100 kilogrammes of explosive was used in the blast. The blast was so intense that the truck was completely burnt and a car and motorcycle also damaged.

Police and FC troops have reached the area, which has been cordoned off for gathering evidence.

Rescue teams shifted the injured persons have been shifted to the Civil Hospital for treatment.

Talking to media, Balochistan Home Minister Mir Sarfraz Bugti said that such terrorist attack could not shake the resolve of eliminating the militants.

He said that a forensic team will come to Quetta from Lahore, adding that the road will be blocked until forensic samples are collected.

The minister informed that six policemen were killed and 22 were injured in the blast.

Balochistan Chief Minister Nawab Sanaullah Khan Zehri strongly condemned the attack, adding that such attack could not discourage the security officials from fighting the terrorism.

On August 12, at least 15 people, among them eight soldiers, were martyred and 40 others wounded when a suicide bomber targeted a military truck near the Pishin bus stop in Quetta.

In June, a suicide car bomber killed at least thirteen people, including seven police officers, in an attack near a checkpoint in the volatile city of Quetta on Friday, officials said.

The blast had taken place near IG Police office in a busy cantonment area where government offices and a girls college are located.