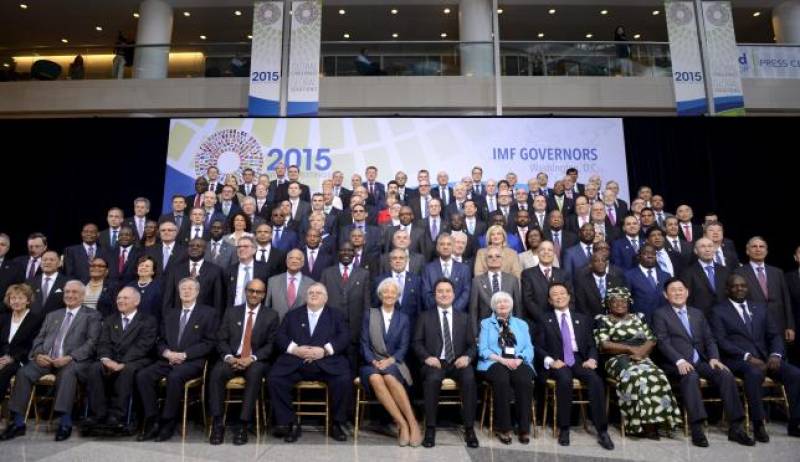 WASHINGTON (APP) - The International Monetary Fund's member nations warned of risks to the global economy from exchange rate shifts and geopolitical tensions as they took note of "moderate" global growth and "uneven prospects."

While economies in developed countries have strengthened, some emerging nations are being hit by weaker commodity prices and exports, the IMF's steering committee noted in a communique.

With the United States poised to hike interest rates, the panel - speaking for the Fund's 188 member nations - said moves toward "policy normalization" needed to be effectively communicated to reduce adverse impacts on other economies.

It also said the "possibility of lower growth potential" was becoming an important global challenge, a topic the panel's chairman said was central to talks on Saturday.

"I came out of this meeting with a sense of optimism," the chairman, Mexican Finance Minister Agustin Carstens, said.

"The fact that a lot of the discussion basically rotated around how to increase growth ... and not only discussing risks - I think that was a very good sign."

The spring meetings of the IMF and World Bank, which conclude on Sunday, have taken place amid growing concerns cash-strapped Greece will fail to reach agreement with its European Union and IMF creditors on reforms that would unlock bailout cash and stave off default.

At the same time, risks of a stronger dollar and low commodity prices have hit emerging markets as China's blistering economic growth has slowed.

Low inflation remains a concern for many developed economies despite signs the European Central Bank's quantitative easing program has boosted Europe's ailing economy, and the communique called for easy monetary policies to be maintained where needed.

"Global imbalances are reduced from previous years, but a further rebalancing of demand is still needed," the communique said. That appeared to echo U.S. concerns over Germany's huge current account surplus.

In the United States, the central bank's moves toward a rate hike have sent the dollar soaring, and officials from nations around the globe warned of the risk of financial and economic disruptions as the path of major central banks diverge.

Canadian Finance Minister Joe Oliver said in a statement to the IMF panel that "among the most significant downside risks (was) the potential for financial instability associated with asynchronous monetary policy in systemic economies."

While there has been little sign at the meetings of a renewed flare-up in the "currency wars" despite a surge in the value of the dollar against the euro and yen, China's growing economic clout has overshadowed the talks.

Beijing has touted its own development bank, a rival to the established Washington-based institutions, and is pushing to include the yuan in the IMF's currency basket to reflect its economic might.