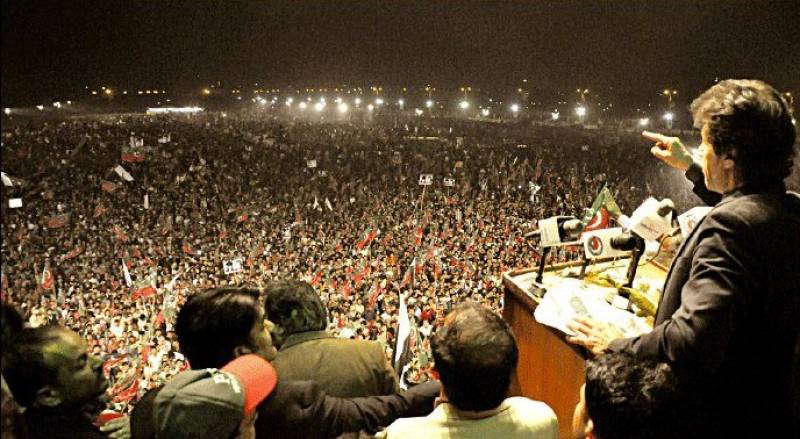 KARACHI (Web Desk) - Pakistan Tehreek-e-Insaf chief Imran Khan has exhorted the citizens of Karachi to lay foundation of a new Pakistan by voting his party candidate in the NA-246 by-poll due on April 23.

In his address to a huge gathering of PTI supporters at Shahrah-e-Pakistan on Sunday, the cricketer-turned politician said, “People must come out on April 23, register their vote, and show support for PTI to help us create a new Karachi and a new Pakistan.”

Khan however maintained that his party was not contesting the poll for another National Assembly seat but for a peaceful Karachi.

He held the view that after the judicial commission’s decision on electoral rigging in the 2013 general elections fresh elections will help PTI claim a thumping victory in Punjab, let alone other cities.

On the occasion, Khan questioned Muttahida Qaumi Movement chief Altaf Hussain as to why he was in London for the past 23 years.

Earlier, PTI candidate from NA-246, Imran Ismail said they were not scared of the MQM.

The rally staged near Aisha Manzil in the MQM-stronghold was marred by a brief but perturbing power outage when the generator went off, shutting down the sound system and the lights set up near the stage.

According to K-Electric, the outage was caused by a technical issue in the generator and that the party had control of the power system at the venue.

PTI could not immediately restore electricity in the area because of the absence of an alternate system.

On the occasion, a scuffle was witnessed between PTI activists caused by a usual lack of discipline, worrying the security managers and party’s volunteers who barred the activists from climbing onto the stage.

On Saturday night, the PTI chairman arrived in Karachi along with wife Reham Khan and senior party leaders.

According to analysts, PTI in today’s political showdown attempted to counter the effects of the mammoth and successful gathering staged by their arch-rivals, the MQM on Saturday night.

With only three days left to the crucial by-elections in the metropolis, the contestants are trying their utmost to make the best impact possible on the masses, emphasising their manifestos and their plans for the uplift of the city.

Earlier during the day, Majlis-e-Wehdat-e-Muslimeen (MWM) announced support for PTI, saying they will cast votes for Imran Ismail to ensure his victory in the by-polls.