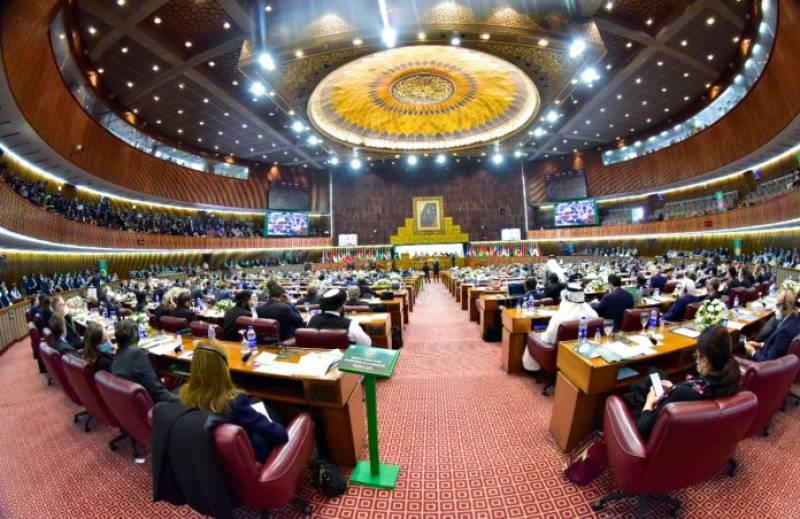 ISLAMABAD – A specially convened meeting of the 57 member states of the OIC on Sunday vowed to play a leading role in delivery of humanitarian assistance to the people of war-torn Afghanistan and unanimously agreed on setting up a Humanitarian Trust Fund, launch a Food Security Programme and engage with the World Health Organization to secure vaccines and medical supplies.

The 17th Extraordinary Session of the OIC Council of Foreign Ministers convened by Saudi Arabia and hosted by Pakistan was attended by around 70 delegates from the member states, international aid agencies and special representatives.

The unanimously adopted Joint Resolution brings a glimmer of hope for the 22.8 million people – more than half the population of Afghanistan – who face acute food shortage. Around 3.2 million children and 700,000 pregnant and lactating women are at the risk of acute malnutrition.

The document adopted after day-long deliberations here at the Parliament House building also expressed solidarity with the Afghans and reiterated the commitment of the OIC Member States to help bring peace, security, stability and development to Afghanistan.

The extraordinary meeting was convened as the UN’s estimates warned that 60% of Afghanistan’s 38 million people face “crisis levels of hunger” and that the situation was getting worse every day. The OIC also expressed deep alarm at the deteriorating humanitarian crisis in Afghanistan.

Prime Minister Imran Khan earlier in his keynote address warned, “Unless action is taken immediately, Afghanistan is heading for chaos.” He said “chaos suits no one” and urged the world to understand the gravity of the situation and reach out to the Afghan people who were facing starvation.

The Council of Foreign Ministers also took into account the fact that the United Nations High Commission for Refugees has pointed out that 665,000 people were displaced within Afghanistan between January and September 2021 – in addition to the 2.9 million people already internally displaced by the conflict in Afghanistan.

Expressing deep concern over the breakdown of Afghanistan’s health system, disease outbreaks and severe malnutrition, in particular in the face of Covid-19 pandemic, the OIC decided to establish a Humanitarian Trust Fund, under the aegis of the Islamic Development Bank, which would serve as a vehicle to channel humanitarian assistance to Afghanistan, in partnership with other international actors.

The Council of Foreign Ministers decided that the OIC General Secretariat, together with the Islamic Development Bank and Humanitarian Trust Fund, shall commence discussions with the UN system organisations to devise a roadmap for mobilizing action in relevant fora to unlock the financial and banking channels to resume liquidity and flow of financial and humanitarian assistance. It would also devise a mechanism for disbursement of urgent and sustained humanitarian assistance to people of Afghanistan.

The meeting expressed deep alarm at the worsening economic situation in Afghanistan, which it pointed out was further compounded by the continued freeze of overseas Afghan assets as well as other international assistance, exacerbating the urgent cash-flow problems, including payment of remuneration to public officials, and hindering the provision of essential public and social services to the people of Afghanistan.

The session, which was also addressed by Foreign Ministers of Saudi Arabia, Turkey, Niger, Jordan, OIC Secretary General, UN Emergency Relief Coordinator, President of the Islamic Development Bank, warned that an economic meltdown in Afghanistan would lead to a mass exodus of refugees, promote extremism, terrorism and instability, with dire consequences for regional and international peace and stability.

It also urged the OIC Member States, international donors, the UN Funds and Programmes and other international actors to generously contribute to the Afghanistan Food Security Programme.

The meeting reiterated its call on the OIC Secretary-General to engage with donor financial institutions to provide necessary humanitarian and economic assistance to Afghanistan as well as Afghan refugees in neighbouring countries.

An urgent appeal was also made to OIC member States, international community including the UN system, international organizations, and international financial institutions to continue to provide all possible and necessary recovery, reconstruction, development, financial, educational, technical and material assistance for Afghanistan as policy tools to promote realization and enjoyment of fundamental rights and freedoms by all Afghan citizens.

The Islamabad moot also decided to appoint Ambassador Tarig Ali Bakheet, Assistant Secretary General for Humanitarian, Cultural and Family Affairs at the OIC General Secretariat, as Special Envoy of the Secretary General of the Organization of Islamic Cooperation (OIC) for Afghanistan, to coordinate aid and assistance efforts, and mandated to pursue economic and political engagement with Afghanistan, and to submit periodic reports.