Love beyond borders: Another American bride, another Pakistani groom 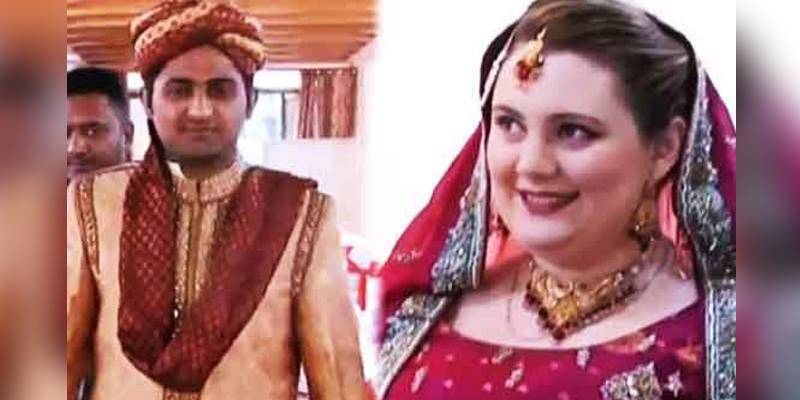 LAHORE - A 21-year-old US citizen has tied the knot with a 23-year-old Pakistani man in Punjab capital after they found love on the internet.

Mohsin Ali and Maria Angelo became friends on Facebook and it turned into an "eternal bond" with time.

Later, Maria traveled all the way from the United States to meet the love of her life, Mohsin, who lives in Lahore's Gulshan-e-Ravi area.

The wedding took place in a local hotel the other day. The relatives of the boy attended the ceremony to extend best wishes to the couple for their future life.

Maria says she wants to get settled in the US with her husband.

Last week, another woman named Helena from the US had arrived in Pakistan to tie the knot with her love of life, a youngster hailing from Sialkot named Kashif.

The American had met 21 years younger boy at social media website and their bond got so strong that they both decided to tie the knot with him.

LAHORE - A woman from the United States says she feels on top of the world after finding her soulmate in the Pakistani ...

In an exclusive interview with Daily Pakistan just before their Nikkah in Kashif’s native town of Raipur, the couple shared their love story that started on Instagram some 10 months ago.

“I am just so happy that I have no words,” said Helena, who has just embraced Islam after listening to Dr Zakir Naik’s lectures.

“I’d be happy to live wherever Kashif will keep me,” she told Daily Pakistan.

Kashif, a shy B.Com student, said he is teaching Maria how to pray.

The couple, who were flanked by the groom’ friends, plan to stay in the country for some time.

When asked how many children she would like to have with Kashif, the veterinary doctor replied, “It’s up to God.”