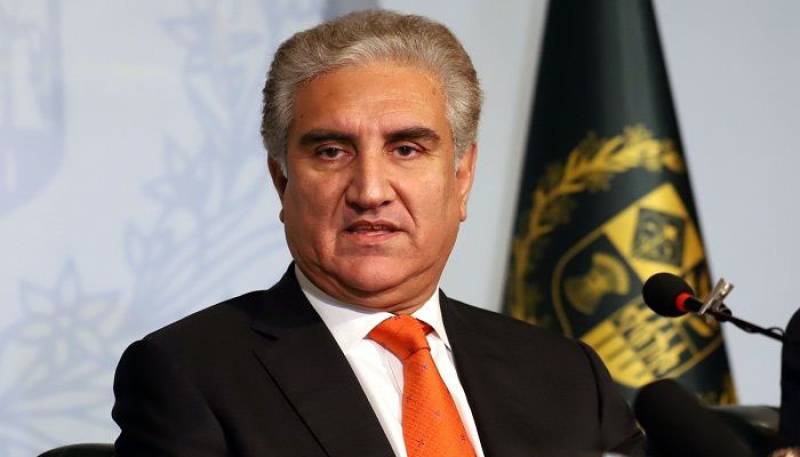 ISLAMABAD - Foreign Minister Shah Mahmood Qureshi writes another comprehensive letter to the President of the Security Council and the Secretary-General of the United Nations (UN) as part of Pakistan 's ongoing efforts to internationally highlight the dire situation in the Indian occupied Jammu & Kashmir and the plight of the Kashmiri people after India 's illegal and unilateral actions.

Among other things, the foreign minister conveyed Pakistan 's rejection of the "bifurcation" of Indian Occupied Jammu & Kashmir; highlighted the continued violation of human rights by Indian occupation forces and reiterated the call for the strengthening of UNMOGIP, foreign office in a press release on Monday said.

At Pakistan 's request, the foreign minister's letter had since been circulated to the UN membership as an official document of the Security Council.

The minister in his letter urged the Security Council to remain actively seized of the matter and urgently address the deteriorating situation in the region that was threatening regional peace and security.

According to press release, the minister in his letter said that in continuation of his letters of 1, 6, 13 and 26 August, and 16 September, he wanted to bring attention to the latest developments, including the illegal "bifurcation" of the Indian Occupied Jammu & Kashmir (IOJ&K) and continued escalation on the Line of Control (LoC), as well as increasingly belligerent rhetoric emanating from New Delhi.

"The Government of Pakistan has rejected the "bifurcation" of Indian Occupied Jammu and Kashmir (IOJ&K) into two Union Territories. Changing the status quo in IOJ&K unilaterally is in complete violation of the Security Council Resolutions, including Resolutions 47 (1948), 51 (1948), 80 (1950), 91 (1951), 122 (1957) and 123 (1957). These Indian actions are therefore null and void in terms of international law, and do not, in any way, prejudice the right to self-determination of the people of IOJ&K," the press release quoted the text of the latest letter.

Qureshi said in parallel, the inhuman lockdown that started after the illegal and unilateral actions of the Indian government on August 5, was now closing in on three months.

The iron curtain that had descended on IOJ&K, holding over 8 million Kashmiris under siege, had no parallel in recent history.

"Indian pretentions of "everything is fine" has been exposed by denial of access to international media, leaders of India 's own political parties and civil society organizations to IOJ&K," the minister said.

The situation had been further compounded by the belligerent attitude adopted by the Indian civil and military leadership. One example of this irresponsible and inflammatory posture was the highly provocative statement by the Indian Defence Minister Rajnath Singh, calling for the splitting of a sovereign country, in complete disregard for the Charter of the United Nations, international law and norms of civilized international behavior.

He said this was followed by a baseless and fallacious statement by Indian Army Chief, General Bipin Rawat, alleging that the Indian army had destroyed "launch pads/terrorist camps" on the Pakistani side of the Line of Control.

Despite Pakistan 's immediate request to the Indian High Commission in Islamabad to share details, including longitudes and latitudes of the location, no response was received from India .

What had actually happened was unprovoked ceasefire violations by Indian troops, targeting civilians on the Pakistan side of the LoC .

"To expose the Indian falsehood, we took members of the diplomatic corps based in Islamabad, as well as media representatives, to the site of Indian ceasefire violations. We also invited Islamabad-based Indian diplomats to join. They however, chose to stay away. There were, of course, no "launch pads/terrorist camps", the press release quoted Qureshi as saying.

He said this episode once again exposed the intent of the Indian government, which seemed willing to go to any extent to malign Pakistan , and take actions to divert international attention from the nightmare the people of IOJ&K are going through.

On 29 October, the Office of the High Commissioner for Human Rights (OHCHR) shared with the world community the latest update on the dire human rights situation in IOJ&K, stating that it was "extremely concerned", and highlighting prevention of freedom of movement, hampering the rights to peaceful assembly, health, education and freedom of religion and belief, as well as excessive use of force including the use of pellet guns.

Qureshi reiterated his earlier request for the UN Security Council to work on strengthening both the mandate as well as the capacity of the United Nations Military Observer Group in India and Pakistan (UNMOGIP) the eyes and ears of the international community.