President Xi in Pakistan to unveil $46b trade plan 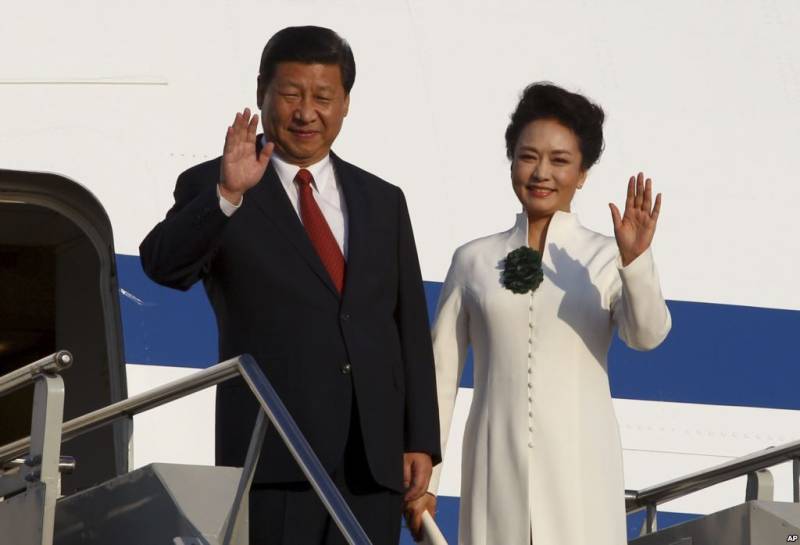 ISLAMABAD (Web Desk) - Chinese President Xi Jinping arrived in Pakistan on Monday for a two-day visit in which he is expected to announce $46 billion worth of investment projects in energy and infrastructure development.

Prime Minister Nawaz Sharif and the country's top civilian and military leadership received the visiting president at an air force base near the capital, Islamabad. The president was given a military guard of honour and a Pakistani fighter jet fly-by.

Xi will announce $46 billion worth of projects in the energy and infrastructure sectors, said Federal Minister for Planning and Development Ahsan Iqbal, who is overseeing the projects, calling it "proof of our great bond with China."

“The real opportunity of this China Pakistan Economic Corridor is that it changes the scope of the relationship from geopolitics to geoeconomics,” he added.

The project foresees the creation of road, rail and pipeline links that will cut several thousand kilometers off the route to transport oil from the Middle East to China, while bypassing India.

The upgrade will stretch 3,000 kilometres from the port of Gwadar on the Arabian Sea to China’s western city of Kashgar. Pakistan transferred control of the port to a Chinese public company in 2013.

Iqbal said $11 billion has been set aside for the corridor.

With the plan, known as the China Pakistan Economic Corridor (CPEC), Pakistan hopes the investment will spur its long-underperforming economy, which the IMF projects to grow 4.3 percent this year.

Xi will be traveling with a large business delegation and is expected to oversee the signing of investment agreements in the energy and transportation industries, part of Beijing's plan for a China-Pakistan "economic corridor."

China and Pakistan have long maintained close political and military relations, based partly on mutual antipathy toward neighbor India. However, stronger China-India ties have challenged that perception and Xi's visit seems intended to reassure Pakistan that relations remain robust.

The two allies have enjoyed close diplomatic and military relations for decades, though economic ties have only grown more recently. Bilateral trade crossed $12 billion last year compared to only $2 billion a decade earlier.

Xi postponed a visit to Islamabad last year due to anti-government protests and went ahead with a visit to India. China is also eager to boost trade and investment with India, and Indian Prime Minister Narendra Modi is expected to visit Beijing in the coming weeks.

China is a leading arms supplier to Pakistan and has sought its help in combating anti-Chinese Islamic separatists reportedly hiding in the country's lawless tribal areas. China is also eager to enlist Pakistan's help in stabilizing Afghanistan as US and international troops wind down their presence there.

Before embarking on his state visit, Xi said the two countries should align their development, trade and economic strategies more closely.

Xi wrote that he felt like he was “going to visit the home of my own brother” on his two-day visit.

The projected investments, $28 billion of which are ready to be signed during Xi’s visit, dwarf a US assistance package to Pakistan of $5 billion that began in 2010 but has not made as great an impact as hoped.

Referring to the US aid, signed under the Kerry-Lugar-Berman Act (KLB), Iqbal said: “KLB was $1.5 billion per year, out of which only $600-700 million went to government. Most of it went to non-government sectors and the bulk went to American companies.

“That is a problem with assistance that comes through the aid mode.”

Iqbal was more optimistic about Beijing’s investment, saying it would integrate three engines of growth in the continent: South Asia, Central Asia and China.

“I just hope that Beijing´s big-ticket projects are matched by Islamabad’s clear commitment and action on the ground,” said Pakistan People’s Party (PPP) leader Sherry Rehman, an opposition lawmaker and director of the Jinnah Institute think-tank.

“Executive stalemate in Islamabad can kill off the best projects from an ally like Beijing. So basically the Economic Corridor needs to be paved with more than good intentions from Islamabad,” she said.