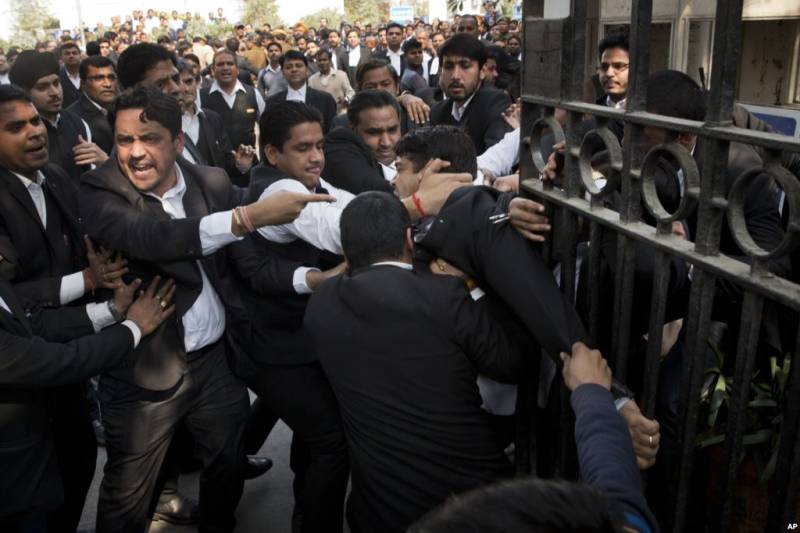 ISLAMABAD (APP) - After the pro-Afzal Guru event in New Delhi's Jawaharlal Nehru University (JNU), Indian police have started a massive crackdown against the Kashmiri students studying in different universities in the Indian capital and some of them have returned to the Occupied Kashmir Valley.

According to KMS , a JNU student, who has returned to Kashmir, told a Srinagar-based English daily Delhi police have launched a massive hunt to track the Kashmiri students and the manhunt is not confined to JNU students only.

"Kashmiri students are facing harassment everywhere in Delhi as police have launched a witch-hunt against them. Even the students, who are residing in private guest houses, have been asked to vacate the rented homes. The tenants living in Delhi from a long time have also been asked to vacate by their landlords," he said.

of safe place. There are reports that some of the students have either returned home or hiding to avoid unnecessary harassment.

An M Phil student of JNU said, "I have been changing rented rooms since February 9. Prior to the JNU row, I was residing in south Delhi but the Delhi cops once visited my landlord and enquired about me. As soon as the cops left, my landlord asked me to vacate the rooms even without paying the rent.

They were so scared that they asked me to vacate their place within an hour," he said. The student said that since then he had been trying to find a safe place for himself in Delhi and had changed three rooms so far.

According to the Kashmiri students studying in Delhi, some posters are being circulated at railway stations and other public places by the leaders of the student wing of RSS with the sketches and photographs of Kashmiri students.

"The posters read that actual anti-nationals are roaming around freely while people like Kanhaiya Kumar are behind bars," a Kashmiri student from Delhi told the daily.

Following the police crackdown, parents of Kashmiri students studying in India have asked their children to return. However, those who cannot afford returning home because of their exams and other genuine reasons, have gone into hiding.

The students said, "Police is profiling us unnecessarily and they are contacting our university officials and getting our details. We are feeling insecure and humiliated."

It is to mention here that the harassment of Kashmiri students started after the JNU Students Union organised a solidarity march for Kashmiri martyr, Muhammad Afzal Guru, on his martyrdom anniversary on 9th February. The JNU student leader, Kanhaiya Kumar, has been booked under sedition charges.