Ratings in Ramzan: Amir Liaqat vs. Fahad Mustafa, who wins the race? 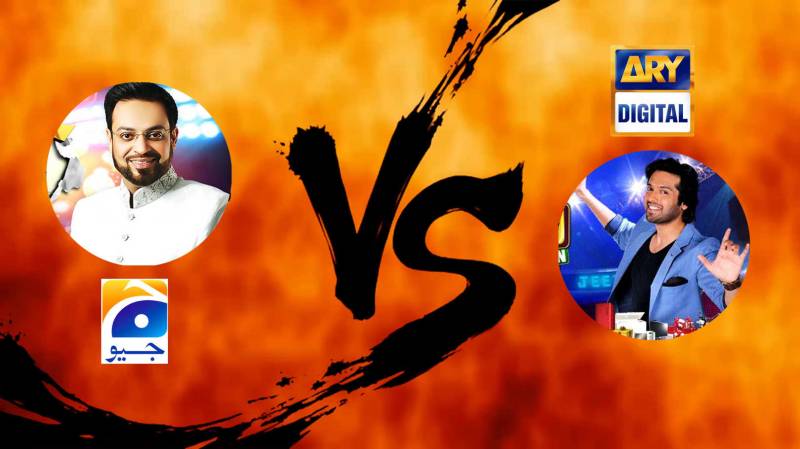 The race for ratings gets really tough in Ramazan. While many people make fun of the seasonal religious figures that pop up during the month, this doesn't stop them from securing the highest ratings in this season.

So what exactly are the actual ratings of Pakistani TV channels in Ramazan? And which show managed to get the highest ratings?

⬆ This is what Sehri looked like one day before Ramazan. For some reason people overwhelmingly chose to watch Samaa at 2:30-3 AM in the morning.

⬆ And this is what Aftari time looked like. Everything looks so calm and peaceful, there is no huge gap between the ratings of different channels, yet.

⬆ This is what 6th June (Day before Ramazan) looked like, in terms of TV Channels' average ratings for the whole day.

⬆ Whoa! This is Sehri time on the first day of Ramazan. You can already see a dramatic jump in the ratings of two channels, while the rest of them take a nosedive.

⬆ Same goes for Iftari. The crucial time slot, 7PM to 8pm, is dominated by ARY Digital and Geo Entertainment.

For the rest of the week, these two channels dominate the ratings for the Iftar time slot, i.e. 6 to 7PM.

But what about Amir Liaqat vs. Fahad Mustafa?

The most anticipated and talked-about shows in Ramazan are the two game shows hosted by Amir Liaqat on Geo Entertainment and Fahad Mustafa on ARY Digital. Apparently, there is a huge ratings war going on.

Amir Liaqat and Fahad Mustafa's shows start at 7:30 PM after Iftar. The graph above shows ratings from 7:30 to 8PM for the first week of Ramazan. Fahad Mustafa is clearly coming out the winner here.

These (highly rated) game shows go on till 9:30 PM on Geo and till 10 PM on ARY. Lets see the rest of the ratings in this time slot:

Fahad Mustafa clearly comes out a winner in the post-Iftar game-show prime time slot. Not only that, he has beaten Amir Liaqat conclusively, at least in the first week of Ramazan. Amir Liaqat will have to up his game, or do something unbelievably ridiculous, to get the crown back from ARY Digital.

While GEO does dominate in Ramazan's Sehri and Iftar transmission, Fahad Mustafa's 'Jeeto Pakistan' show has managed to snatch Ramazan ratings' glory from the clutches of Geo Entertainment. If it weren't for Fahad's conclusive victory over Amir Liaqat, Geo would have had a huge margin over ARY.

Ary Manages to to clinch the first spot in the Ramazan ratings' race by a tight margin in the Average Daily ratings (for all time slots).

When it comes to media ratings, Ramazan is truly a game changer. While news channels enjoy comfortable ratings during the rest of the year, Ramazan belongs to ARY Digital and Geo Entertainment, and more specifically, game shows hosted by Amir Liaqat and Fahad Mustafa. A lot of people love to hate these shows, but apparently, everyone is watching them despite our criticism.