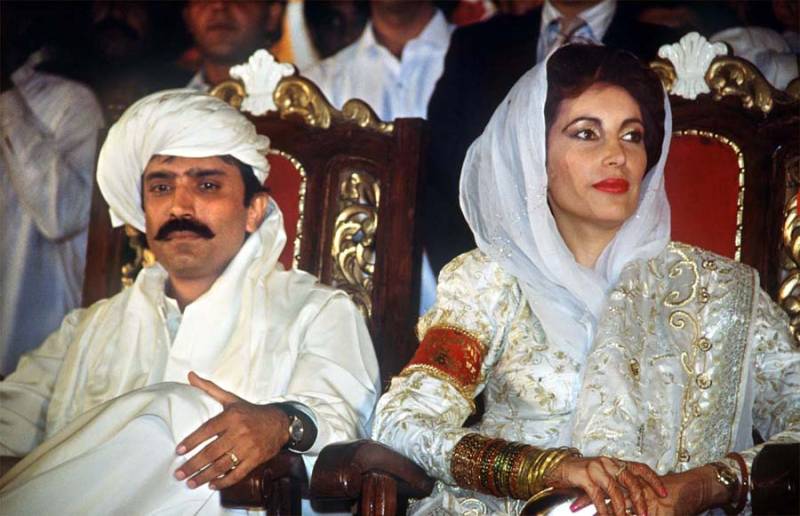 RAHIM YAR KHAN - Renowned cleric Maulana Bilal Ahmed Din Puri claimed on Friday that the slain leader of Pakistan Peoples Party Benazir Bhutto faced the torture of Asif Ali Zardari after getting married but avoided any confrontation and showed respect towards him.

The cleric who made the startling disclosure happens to be the son of Maulana Siraj Ahmed Din Puri- the spiritual mentor of Benazir Bhutto - further claimed that the PPP leader was a staunch disciple of his father (Maulana Siraj).

"Benazir disclosed about Zardari's torture to Maulana Siraj but even then extended respect towards him in line with Islamic injunctions," added the cleric.

The cleric observed that the PPP had now lost its strength adding that anti-Islamic elements were creating chaos across the globe, highlighting the need for unification of Muslim community (Ummah) to resist the brutality unleashed against unarmed Muslims, reported Khabrain newspaper.

Benazir got married to the son of influential Sindh landlord Hakim Ali Zardari, Asif Ali Zardari on Feb 17, 1987. They both remained married until she was assassinated at Liaquat Bagh Rawalpindi in December 2007.

The couple has three children, Bilawal, Bakhtawar and Asifa Bhutto who are determined to steer the party launched by their grandfather Zulfiqar Ali Bhutto after parting ways with General Ayub Khan in 1967.