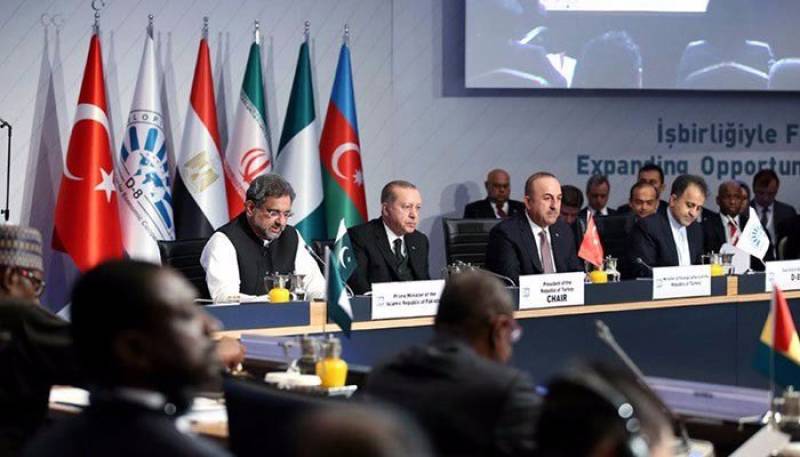 ISLAMABAD - Prime Minister Shahid Khaqan Abbasi declared that the progress achieved so far by the D-8 members fell short of the expectations, necessitating measures to accelerate momentum for a stronger partnership.

Addressing the opening session of the summit in Istanbul on Friday, the premier sought enhanced trade and economic partnerships with D-8 member states.

'Connectivity-led growth is a good example of South-South cooperation. We seek similar partnerships with D-8 member states – through road and rail routes, where possible, but also through stronger air and sea connections, said PM Abbasi.

Prime Minister Abbasi noted that as Pakistan celebrated 70 years of its independence, it was confronted with many challenges over the last decade.

“We faced unrelenting terrorism emanating from instability in our neighbourhood and the environment in the region and beyond.”

He, however, stressed that as a result of a comprehensive strategy and unwavering resolve, Pakistan had successfully turned the tide.

“Improved security has led to economic recovery. Pakistan’s economy has recorded a significant revival in the past four years. Over this time, we have focused on upgrading our communications and energy infrastructure, and enhancing regional connectivity,” he claimed.

The Prime Minister expressed that the China-Pakistan Economic Corridor would further put the economy on an upward trajectory of robust growth.

“We are also working on energy connectivity projects. Pakistan’s integration into the Eurasian Belt and Road network will provide a firm foundation for Pakistan’s rapid economic development.”

He noted that the summit’s theme was in complete harmony with the post-2017 development agenda, visualising sustainable development as one of the core elements of people-centric development.

“Indeed, shared and joint prosperity is the only form of secure and sustainable prosperity. Inclusion based on collaboration ensures that there are no losers in the development effort – all are winners.”

The Prime Minister said Pakistan assumed the Chair of D-8 Organisation for Economic Cooperation in November 2012 at the eighth summit in Islamabad, which adopted two landmark documents: the D-8 Charter and the Global Vision.

These documents have provided the essential basis for our joint endeavours, he claimed.

The premier continued that another significant milestone achieved during this period was the Observer Status for D-8 at the United Nations adding that this status enabled the organisation to closely interact with various UN agencies and affiliated institutions for cooperative arrangements in priority areas for Pakistan.

PM Abbasi said that 20 years ago, a shared vision motivated the leaders of the member states to establish this organisation to promote cooperation in the key areas of agriculture, industry, SMEs, trade, transportation, energy and tourism.

'However, the progress achieved so far falls short of our expectations, necessitating measures to accelerate momentum for stronger partnership,' he added.

The premier pointed towards the stagnation of intra D-8 trade, after an initial increase, adding that the apprehension is that the target of US $500 billion in 2018, envisaged in the 2008 Kuala Lumpur Summit Roadmap, might remain elusive.

Shahid Khaqan Abbasi also emphasised on the need for growth of private sector so it can play its part in the national growth.

“It is the private sector that can make the best use of emerging opportunities for trade and joint ventures. It is, therefore, of utmost importance that we also actively promote entrepreneurship in our countries,” he said.

Laterwards, PM Abbasi handed over to Turkish President Recep Tayyip Erdogan, the Chair of the D-8 Organisation for Economic Cooperation.

“Mr. President, I congratulate you on assuming the Chair of the D-8 Summit. I am confident that your wisdom, sagacity, dynamism and firm commitment will bring new vigour to the D-8 Organisation for Economic Cooperation,” he said.

The Prime Minster also said he and his delegation were deeply touched by the warm welcome and hospitality they received ever since their arrival.

Turkish President Erdogan also addressed the opening session of the Summit and spoke on various challenges faced by the Muslim world in general and the member states in particular, in different spheres of life including economic development.

Let it be known that Abbasi reached Turkey on Thursday to take part in the ninth meeting of eight developing countries, including Pakistan, Turkey, Malaysia, Bangladesh, Egypt, Indonesia, Iran, and Nigeria.

PM Abbasi will also hold a meeting with the leaders of the D-8 member states on the sidelines of the summit.

In the eighth summit of the D-8, the developing countries had signed two landmark documents, including the D-8 Charter and the Global Vision.

Speaking at the inauguration ceremony of the D-8 top ambassadors meeting, Foreign Minister Khawaja Muhammad Asif said that the organisastion could achieve the set goals by making efforts jointly.

The minister said the member states have achieved significant milestones, including an accord on the simplification of visa procedures for business and a customs agreement, Radio Pakistan reported.

The objectives of D-8 Organization for Economic Cooperation are to improve member states' position in the global economy, diversify and create new opportunities in trade relations, enhance participation in decision-making at international level, and improve standards of living.

The idea of cooperation among major Muslim developing countries was mooted by Prof. Dr. Necmettin Erbakan, the then Prime Minister of Turkey, during a Seminar on "Cooperation in Development" which was held in Istanbul in October 1996. The group envisioned co-operation among countries stretching from South East Asia to Africa. Representatives from Bangladesh, Egypt, Indonesia, Iran, Malaysia, Nigeria and Pakistan attended the seminar.