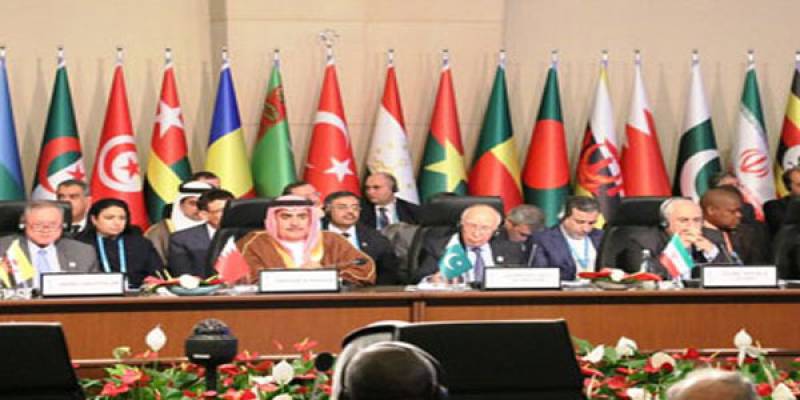 NEW YORK - The OIC Contact Group on Jammu and Kashmir met on the sidelines of the UN General Assembly, in New York, today.

Chaired by Secretary General of the OIC, Mr. Iyad Ameen Madani, the meeting was attended by the Adviser to the Prime Minister on Foreign Affairs, Foreign Ministers of Turkey and Azerbaijan. Senior representatives from Niger, Saudi Arabia and the True Representatives of Kashmiri people, including Mr. Masood Khan, President Azad Jammu and Kashmir, also attended.

Expressing deep concern over the grave situation in the Indian occupied Jammu and Kashmir, the OIC Secretary General called for an immediate cessation of Indian oppression and atrocities and urged the government of India for peaceful settlement of the dispute, in accordance with wishes of Kashmiri people and the UNSC resolutions.

He said that though the Indian occupation forces could physically blind the Kashmiri people by their pellet guns, but they cannot block their vision for the realization of their right to self-determination.

In his statement, the Adviser stated that the Indian brutalities in Indian Occupied Jammu and Kashmir had showed its most horrendous face in the wake of the cold-blooded murder of the Kashmiri youth leader, Burhan Muzaffar Wani.

As a result of the deliberate and inhuman use of pellet guns by Indian Occupation Forces against the peaceful Kashmiri protestors, over 100 innocent civilians have lost their lives, while more than 8000 are injured. More than 150 people have become permanently blind and the eyesight of another 350 has been seriously damaged.

The Adviser stressed that these repressive measures cannot break the spirit of the Kashmiri people and their legitimate struggle for self-determination. On the request of the Adviser to the Prime Minister on Foreign Affairs the members of the Contact Group offered Fatiha for the innocent Kashmiri victims of Indian aggression.

Underscoring that the Kashmir dispute remains central to lasting peace and stability in South Asia, the Adviser regretted that India had failed to reciprocate Pakistan’s proposal of meaningful engagement for the resolution of the Jammu and Kashmir dispute.

The Foreign Ministers of Azerbaijan and Turkey expressed grave concern at the deteriorating situation in the Indian occupied Jammu and Kashmir. They also expressed serious concern at the serious human rights violations perpetrated by India against the innocent Kashmiris.

It was the major obstacle in India-Pakistan relations and its humanitarian aspect required urgent attention of the international community.

The idea of asking the UN High Commissioner for Human Rights to send a Fact Finding Mission to the Indian occupied Jammu and Kashmir was strongly supported.

The Representative of the Government of Niger stated that despite the calls on the Government of India by numerous countries to show restraint, the situation in the Indian occupied Kashmir had become more serious. He said that the International community could not remain indifferent in the wake of such grave human rights violations.

He urged the OIC to continue to mobilize the international community to resolve this long standing conflict as per the UN Security Council resolution.

The True Representatives of the Kashmiri People briefed the meeting about the continued Indian brutalities, especially in the wake of the martyrdom of Burhan Wani on 8 July 2016. The President of Azad Jammu and Kashmir, Mr. Masood Khan also gave a detailed overview of the massive violations of human rights and international humanitarian law being carried out by the Indian occupation forces in the Indian occupied Jammu and Kashmir. The True Representatives also presented a Memorandum to the OIC Secretary General.

The members of the OIC Contact Group expressed their complete solidarity with the valiant struggle of the Kashmiri people. They reaffirmed their resolve to remain the voice of the Kashmiris’ at the international stage.

The conclusions of the meeting were adopted and would be submitted for appropriate action of the Council of Foreign Minister of the OIC.