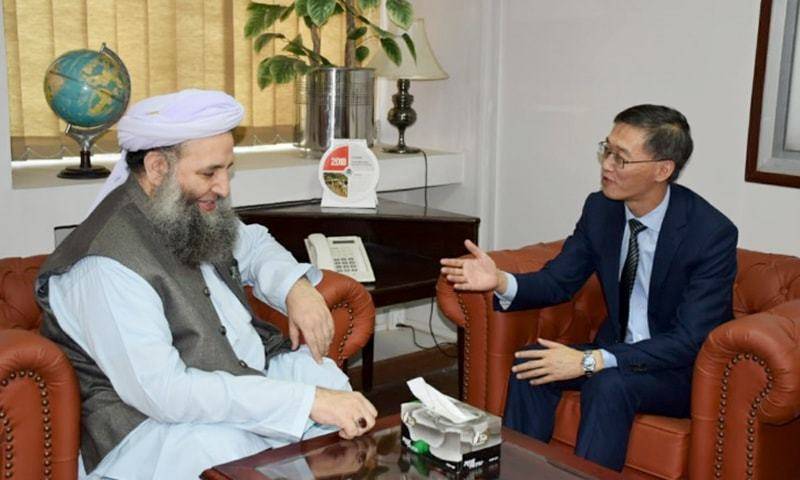 During the meeting, bilateral relations and matters of mutual interest were also discussed.

“Pakistan’s friendship with China is above and beyond any political agenda, the roots of which lie deep within the people,” said Qadri.

Saying that China–Pakistan Economic Corridor (CPEC) is Pakistan’s national priority, he moved on to the pressing matter of the life of Muslims who are facing numerous restrictions in China’s Xinjiang province and demanded that they are provided relief and equality.

“The placement of restrictions increases the chances of an extremist viewpoint growing in reaction,” the minister told the Chinese ambassador, asserting that concrete steps need to be taken to weed out such mindsets and promote interfaith harmony instead.

NINGXIA (China) - Thousands of Muslims have been gathering at a mosque in north-west China to protest its planned ...

The minister and ambassador also discussed talks between religious scholars belonging to Xinjiang and Pakistan. “The Chinese government is the bearer of Sufi and moderate thought and resolves to sort the differences between various religious groups,” said the Chinese ambassador.

He invited Qadri for a visit to China, a trip which the federal minister was glad to accept.

“Exchange of viewpoints between religious scholars of both countries is vital for better interfaith relations,” Xing said further, assuring Qadri that China will facilitate the visit of a Pakistani religious delegation to the Xinjiang province.

“Pakistan is an important representative of the Muslim world and we want to further strengthen Pak-China relations on an Islamic level,” he said.

“With Pakistan’s cooperation, China desires to work for the social development of the former Federally Administered Tribal Areas (FATA) region and Afghan migrants,” he concluded, expressing his country’s interest in working with Pakistan to develop an educational curriculum for the Muslim community.

GENEVA/BEIJING - The United Nations has accused China of holding as many as a million Uighur and other Muslim people in ...