ISLAMAABD - In a visibly sexist approach, the National University of Sciences and Technology has allowed the boys to smoke inside the designated areas, barring girls from the same liberty inside its Islamabad campus.

A copy of the notification issued by the administration states that the female Nustians will be fined Rs1,000 if they access the smoking areas, warning that the parents of the violators will be informed as well.

NUST, a top institute of Pakistan, designated smoking corners to discourage smoking in hostels, washrooms and secret corners by students, however, the development has earned flak for the varsity. 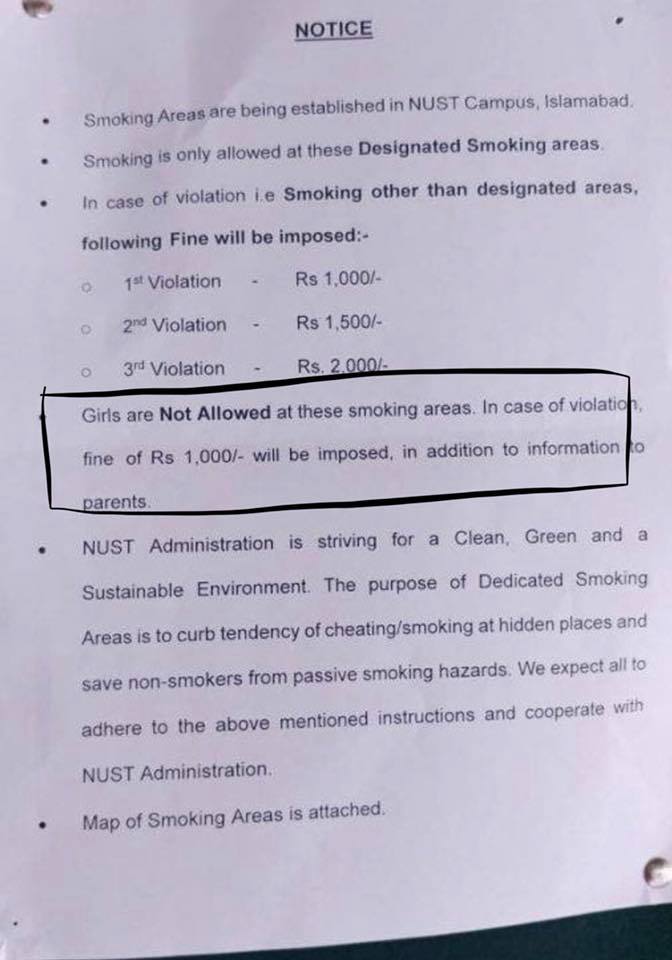 Commenting on the sexist approach,Project Manager Smoke Free Islamabad Aftab Ahmed said after vacations the notification will be revised.

Good to discourage smoking but discriminatory approach towards girl students and gender-biased rules cannot be acceptable. Wrong message being given to our young students - that it is okay to discriminate against women. Banning smoking for all on campus would be far healthier too pic.twitter.com/F7lgHcgO3T

Banning smoking for all on campus would be far healthier too, Mazari stated in his Twitter message.

Pakistan's top varsities have earned the criticism in past owing to 'weird' policies, concerning gender.

Bahria University in Karachi was lampooned in May for a notification directing male and female students to maintain ‘six-inch’ distance between each other and forbade “touching of males and females”.