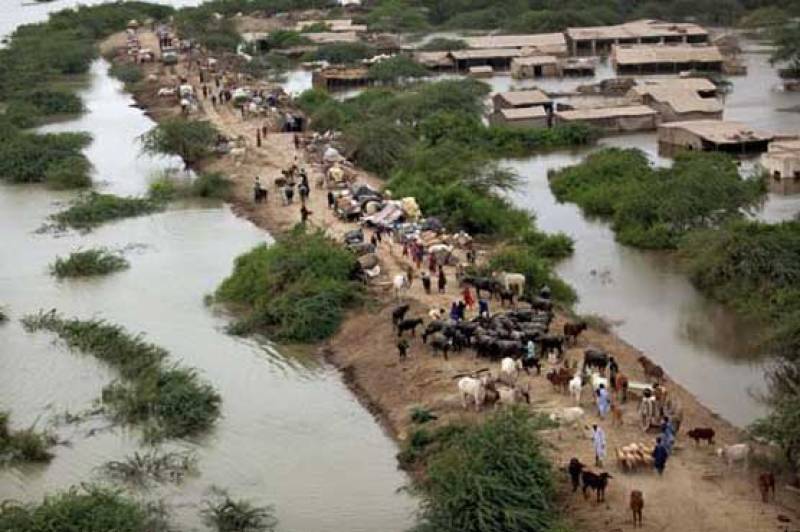 River is flowing in medium flood at Rajanpur and DG Khan while more than 200 villages submerged in Rojhan and Layyah.

Torrential rains and flash floods have hit various villages and cities across the country, forcing the authorities to declare an emergency and issue alerts.

In Punjab, all rivers are flowing normally and there is no danger of flood at present.

This has been stated by the Punjab Home Minister and Chairman of Cabinet Committee for Flood, Shujah Khanzada.

He said all the district administrations throughout the province have already adopted the necessary precautionary measures.

Around 500,000 cusecs water will arrive at Taunsa Barrage on Tuesday evening and create medium to high flood situation in Layyah, Muzaffargarh, Dera Ghazi Khan and Rajanpur districts during the next 72 hours.

According to Radio Pakistan, discharge of water from Taunsa Headworks was 410,500 cusecs with medium flood. The discharge from Kalabagh has been recorded 383,000 cusecs.

The discharge from Chashma has been recorded 479,000 cusecs.

In Layyah, the riverine villages of 9 Union Councils are inundated and the water is quickly rising there.

Seventy one villages have been inundated in District Layyah, fifty in District Rajanpur and ten in Muzaffargarh.

According to a spokesman of Provincial Disaster Management Authority (PDMA) in Lahore, the Administration of these districts has already evacuated the people of the area in time and shifted them to safe places.

The spokesman said the Administration is monitoring every kind of situation on the spot.

He said no human loss has been reported from any of these places.

32 relief camps set up for flood victims in Rajanpur.

In Rajanpur, due to rain in Suleman range, ‘Hill Torrent Kaha Sultan’ received over eight thousand cusecs of water on Tuesday morning.

Talking to our Multan Correspondent, DCO Rajanpur Zahoor Hussain Gujar said district administration is extending every possible help to the affectees of Hill Torrent areas and the riverine areas of Indus River.

He said 32 relief camps are being set up for the flood victims.

The River Indus is in medium flood at Tarbela, Attock, Kalabagh, Chashma and Taunsa while in low flood at Guddu and Sukkur barrages.

According to Flood Warning Center Peshawar, River Kabul at Warsak and Nowshera and River Panjkora at Dir are in medium flood this morning.

Rest of the rivers in the province are flowing normal.

Pakistan Army and FC are carrying out rescue and relief operation in flood-hit areas of Chitral to mitigate sufferings of the affected people.

According to Inter-Services Public Relations two Army helicopters are engaged in the relief operation. Over eight tons food has so far been distributed among the stranded people and at least fifty persons have been rescued.

Spillways of Tarbela and Khanpur dams have been opened after surge in water level.

According to the Dam Administration, water level in Tarbela dam has reached 1526 feet.