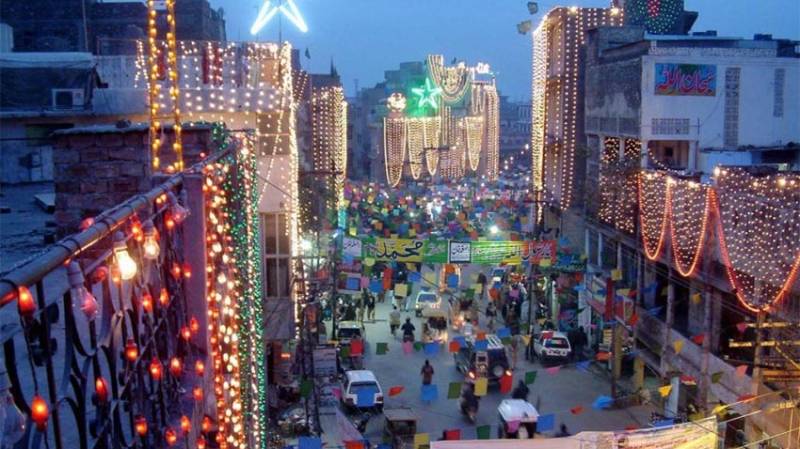 LAHORE - Eid Milad-un-Nabi, the birthday of Holy Prophet (Peace Be Upon Him) is being observed across the country with traditional religious zeal today (Wednesday).

The government has announced a public holiday on Wednesday.

Special Conferences, events, and Mehafil-e-Naat have been arranged to pay respect to the last messenger whose whole life and teachings are beacons of light for the whole of mankind.

Strict Security measures have been taken to maintain the law and order situation and avoid any untoward situation. The Sindh government has imposed two-day ban on pillion riding.

Cellular services have been suspended in parts of the country and will be restored in the night.

Government and private buildings have been decorated with colourful lights, flags, buntings and banners to mark the occasion. This includes city streets, mosques, shrines, shopping centers as well as private residences.

The federal government has organised two-day international Rehmatal-Lil-Aalameen Conference in Islamabad at Jinnah Convention Centre under the auspices of Ministry of Religious Affairs and Interfaith Harmony.

President Arif Alvi and Prime Minister Imran Khan have congratulated the nation on the event. They also called for truly following the teachings of the last Prophet to realize the objective of establishing an Islamic welfare state.

In his message, President Arif Alvi said we should give preference to collective national and religious interests and bring positive change in our deeds and actions to transform the country in accordance with the State of Madina.

Prime Minister Imran Khan in his message said the nation should make firm pledge today that it will follow the life of holy Prophet (SAWW) in true spirit whilst rising above any petty interests. He said we should refrain from steps which distort the image of Islam in the world.

The Prime Minister urged the countrymen to promote unity, tolerance, brotherhood and interfaith harmony amongst their ranks as per the teachings of holy Prophet Muhammad (SAWW).