Obama takes a few steps back at the UNGA 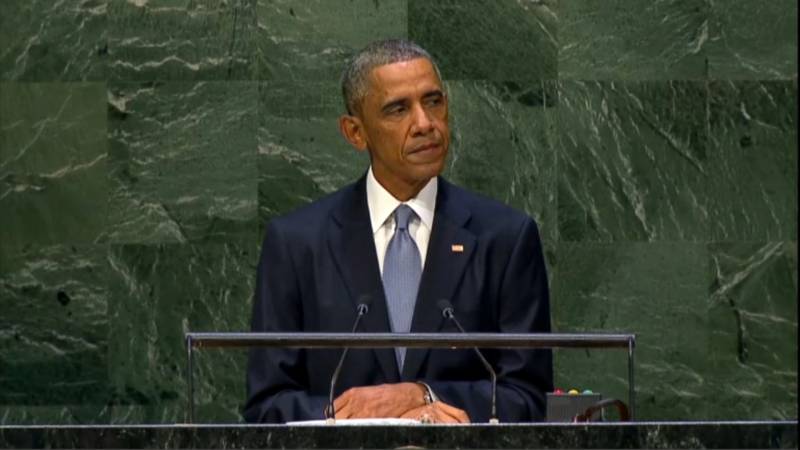 NEW YORK (Usman Shami) - General Debate has started at the 71st annual session of the United Nations General Assembly (UNGA), where the heads of the member states or diplomatic representatives are speaking on a variety of global issues. The debate would continue till September 26. On the first day, the speech of the outgoing US President, Barack Obama, outshone the other speakers. This was Obama's last speech as an American president at the UNGA.

In his speech, Barack Obama presented relatively transformed opinions on several international issues, including the Syrian crisis. Last year, at the UNGA, Obama had declared that Syrian President Bashar al-Assad would have to go home in any way. This statement was befittingly responded by Russian President Vladimir Putin, who had called the attempt to topple Assad regime a dire mistake. Putin is not attending the ongoing session and Russian Foreign Minister Sergey Lavrov will address the UNGA on his behalf.

Obama tabled a changed stance at the UNGA this year. He said the Syrian issue could not be resolved through war, but diplomatic dialogue. He also conceded that sectarian strife and extremism could not be immediately wiped out of the Middle East.

This change is probably an indication of failing American strategy in Syria. Through this, Obama also accepted the US has failed to overthrow President Bashar al-Assad in the presence of Russian forces, which strongly backed the Syrian government against the rebels and the Islamic State militant group. Meanwhile, the Syrian peace truce agreed by Russia and the US is also practically dead after coalition jets targeted Syrian forces.

The outgoing US president also hit out at Republican presidential nominee Donald Trump. He criticised the idea of construction of a wall along Mexican border to check illegal migrations, saying “The world is too small for us to simply build a wall and prevent it from affecting our own societies”.

In his final UNGA speech, Obama also took up Israel-Palestine conflict effectively. This is probably the first time a sitting US president has admitted Israeli occupation, in such clear words, at UNGA. He also urged Palestinians to give up the violence and accept the state of Israel. Reciprocally, the US president called on Israeli leadership to admit the fact that they could not maintain occupation forever. It is however, worth mentioning that Obama's sudden 'U-turn' on Israel seems nothing more than a statement, as he has never took any concrete practical step to resolve the conflict during his 8 years of presidency- that is when he had a chance to actually play a role.

The US president also warned the world leaders that globalisation had exposed international fault-lines, and if these problems remained unaddressed, they would further divide the whole world instead of bridging the distances. Obama said his government made extraordinary measures to normalise ties with countries like Cuba and Myanmar following this philosophy.

On the other Prime Minister Nawaz Sharif spent a rather less busy day in New York. He held one-on-one meetings with Japanese Prime Minister Shinzo Abe and Turkish President Recep Tayyip Erdogan. He also spoke at Leaders' Summit on Refugees. The prime minister is set to address the UNGA session between 12:00pm and 1:00pm (New York local time), where he plans to draw world attention towards the ongoing Indian atrocities in Occupied Jammu and Kashmir. Pakistanis as well as Indian diplomatic elements are anxiously waiting for his speech.

Apart from the General Assembly session, another development which could be worrisome for Pakistan is also unfolding here in the United States. The law enforcement agencies detained the New York bombing suspect, identified as Ahmad Khan Rahami, on Monday night. He is an American national of Afghan origin, but according to security officials, his wife hails from Pakistan's city of Quetta. Rahami married her during his Pakistan visit some years ago. The wife, whose identity is being kept secret, was also arrested in United Arab Emirates, according to American media she had flown to Pakistan few days ago.

The suspect's neighbours told news channels that a while ago Rahami had spent around an year in Pakistan and Afghanistan, and upon his return to the United States, he had transformed in to a very religious person. For now, nothing more can be said about his possible radicalization in Pakistan and Afghanistan. But still, this is troubling for Pakistan, as the attack has taken place just before the 2016 US presidential elections where Republican candidate Donald Trump has been using such examples to seek support for his Islamophobic rhetoric. Latest polls suggest that Trump has bridged the lead previously held by Democrat contestant Hillary Clinton.