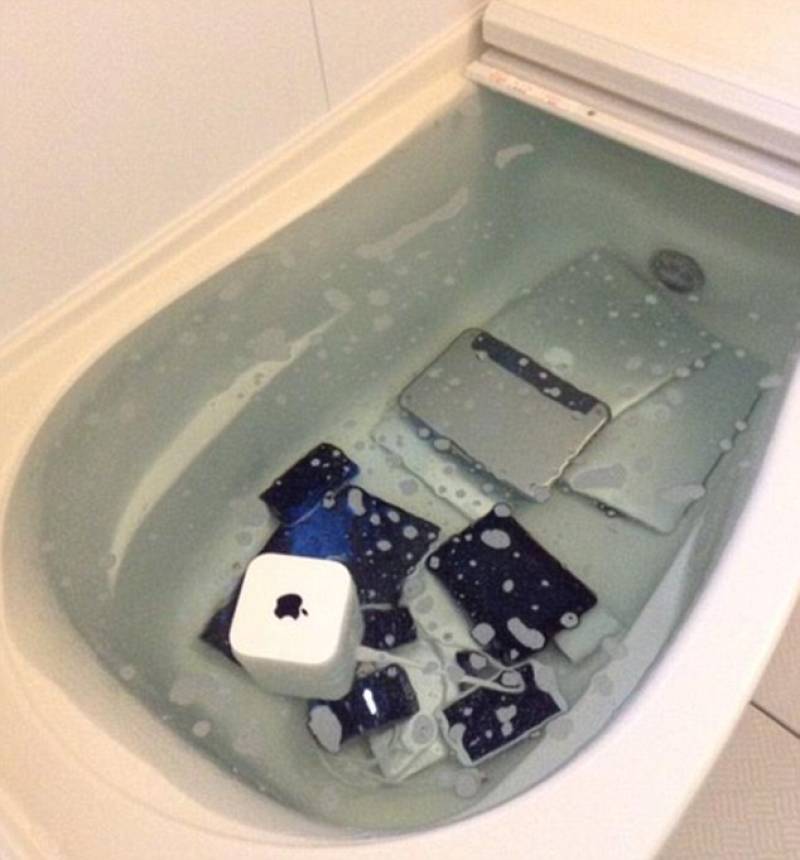 TOKYO (Web Desk) - A Japanese woman got sweet revenge on her cheating boyfriend by giving his Apple collection a good wash.

The unnamed heartbroken girlfriend clearly knew how to hit her lying lover where it hurts, and dumped his iMac, iPhone, iPad and accessories in the bath tub.

She then took photos of the gadget Jacuzzi, and sent them to him. Presumably on the one item of technology that wasn't currently taking a long soak.

As most of us know, a substantial splash is enough to send your gadget to glitch town, and so the dip this man's prized collection took is sure to prove irreversible damage.

Particularly as the woman scorned took the trouble to give his iMac - which start at £899 - a single soaking. Just to make doubly sure the water damage was total.

Even if he tries the recommended trick of leaving his gadgets in uncooked rice for 48 hours, we think all the rice in Japan couldn't dry this lot out.

Clearly feeling little remorse for his sins and perhaps looking for sympathy, the unnamed man, also from Japan, Tweeted the pics to his account @foolishnessfly2.

Retweeted more than 15,400 times, the response has been mixed.

The hearts of Apple fans are mainly with the man, with the general consensus being that destroying a fellow's prized Apple collection is a bit harsh, even if he did cheat.

While others agree that revenge is a dish best served in hot water.

Although a lot of the comments were in Japanese (and the 'translate' button did little to help), the English-language responses were in favour of the woman's methods.

@babysdoc hailed it as 'the best revenge', while @jewlish spoke the words of women the world over with a 'you go, girl!'.

@womenspeakup pointed out that the guy should be counting his lucky stars that it was his Apple and not his genitals that paid the price of cheating, referring to Lorena Bobbit who cut off her husband's penis with a knife.

Meanwhile, Japanese @Allorcer90 took the time to explain the images to the English-speaking Twitterers who wondered what they were about, adding, 'Haha makes you think twice about cheating on your significant other haha!'