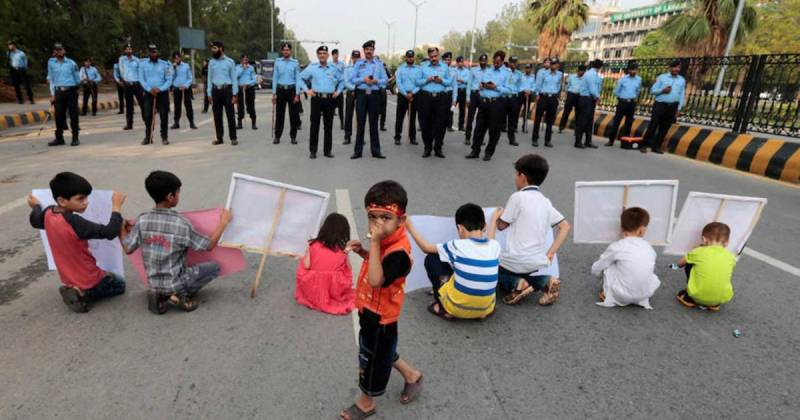 Human beings are born free but are encountering a number of issues that eventually snatch their freedom and make them slaves. The worst form of slavery is the inability of people to think independently and rationally. This kind of slavery grows when people stop demanding their rights. A nation can never become prosperous until basic rights for its citizens are ensured.

A number of efforts have been made both at national and international levels to provide and protect fundamental human rights. However, many people, both in developing and developed countries, are still deprived of them; Pakistan is no exception. Followed by the right to quality education and employment, freedom of speech and expression has also become a rare commodity, whereas the constitution of Pakistan guarantees equal provision of rights.

The worst form of human rights violation taking place in Pakistan is child abuse. According to a private media report, around 3,445 cases regarding the sexual abuse of children were filed in 2017. The actual number is most likely much higher, as child abuse is a sensitive issue that many parents feel reluctant to report. This happens due to lack of awareness among masses. This menace is increasing with each passing day.

However, if a child abuse case is exposed, a number of promises are made by the authorities concerned to adopt proper measures in order to protect children. Speeches are delivered to put an end to this curse. But, after a few days, another incident of the same nature takes place. Serious efforts are needed to eradicate this evil. This form of violation cannot be ended until the offenders are given exemplary punishments, to create future deterrence.

Moreover, women are considered an integral part of any society. Equal participation of women is important to put our country on the road to prosperity. Followed by domestic violence, honour killing is another issue that needs to be dealt with immediately. Furthermore, lack of employment and educational opportunities have paved the way for gender discrimination in our society.

It is believed that when a woman is educated, positives impacts can be seen on that particular society. Our country can never be prosperous until Pakistani women are empowered. It is an alarming fact that women’s labour force participation in our country is around 22.7 %. Since the female literacy rate is less than the male literacy rate, women don’t get equal employment opportunities.

Many women are working on less than minimum wages. According to the Global Gender Gap Report (2017) Pakistan ranked as the second worst country among 144. It is the responsibility of our government to ensure the presence of women at educational institutions and workplaces by solving the issue of gender inequality. It is a sad fact that many organizations prefer to hire males under the assumption that men are more competent and hard-working than women. Such biases deprive our women of their basic rights. Such factors show that human rights are deteriorating badly.

Moreover, the freedom of speech and expression is almost nonexistent in many areas of our country. If a particular group raises a voice for the rights of its people, it is rarely encouraged. According to article 19 of our constitution, every citizen has the right to express himself. The sad plight of this right is not a hidden secret. Many times people are killed or beaten to death if they give their opinion against the poor performance of the authorities or institutions. Moreover, many human rights activists are still absent in many areas of our country.

Such circumstances make other people fearful and deprive them of their right to freedom of speech and expression. Sometimes people do not feel reluctant to take the law into their own hands, as proved by the murder of Mashaal Khan. Most of the time, such situations arise when people are not allowed to think critically and analytically.

Unfortunately, our education system is far behind the needs of modern times. At our educational institutions, students are not encouraged to raise questions that need to be answered. Even if a teacher tries to teach his students to think independently and critically, he faces dire consequences. It is not the certification, but learning that is the main purpose of education. At every educational institution, there must be different societies and platforms dedicated to providing every student with a chance to express his opinions. Such factors can decrease extremism, especially madrassas.

In a nutshell, the provision of human rights guarantees not only peaceful coexistence of citizens but also prosperity for the country. Pakistan cannot be prosperous until its citizens get all their fundamental rights without any discrimination of race, class, creed and area. All the policies must be people-centric rather than area centric. No one must be deprived of any of his rights. We will have to accept this fact before visualizing a better future.