‘Deliberations being made to disqualify me for life,’ says Nawaz Sharif 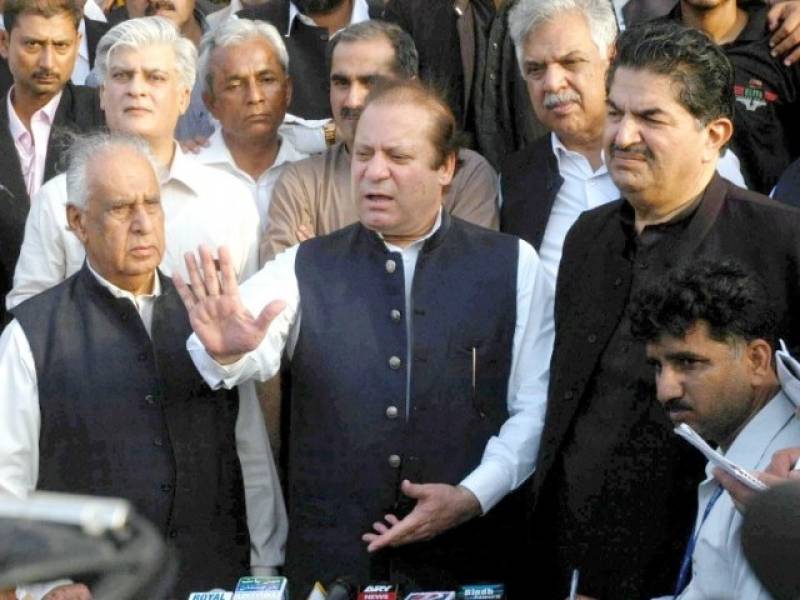 ISLAMABAD - Former Prime Minister Nawaz Sharif on Thursday rebuked the Supreme Court’s verdict to disqualify him as head of the Pakistan Muslim League-Nawaz (PML-N), terming it an act of revenge.

Talking to media outside an accountability court in Islamabad, Nawaz Sharif said that the recent decision of the apex court in Election Act 2017 cases was not unexpected. He said that all these decisions are part of revenge-driven accountability.

He said that all court rulings revolved around one person, adding, "Deliberations are being made to disqualify me from politics for life".

The Supreme Court, on Feb 14, reserved its verdict on appeals regarding the interpretation of Article 62(1)(f) of the Constitution with a view to determining the period of disqualification of a member of parliament.

ISLAMABAD - The Supreme Court on Wednesday reserved its verdict on appeals regarding the interpretation of Article ...

Referring to Panamagate verdict, Sharif said: “The first verdict crippled the government and snatched authority of chief executive”. Now the authority of legislation has been snatched through yesterday’s decision, he added.

“I was disqualified as prime minister through July 28 verdict and removed as party president yesterday, ” he said, adding that the top judges would even amend the constitution to deprive him of his name.

"There is no such law in Pakistan to send a prime minister packing for not taking a salary from his son," Nawaz said, adding that “black law dictionary” was used to disqualify him.