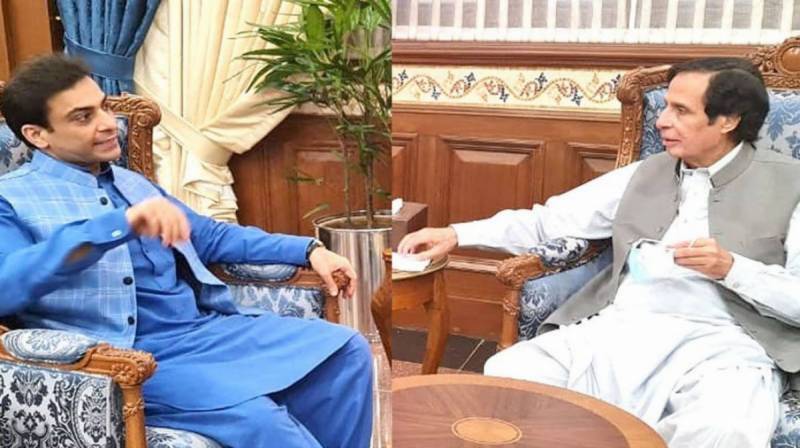 Mazari said he rejected these votes in the light of a letter issued by PML-Q President Chaudhry Shujaat Hussain who said he had directed his party's lawmakers to vote for Hamza Shahbaz.

In total, Hamza got 179 votes and Parvez 186 votes. However, 10 votes cast in favour of Parvez were rejected.

Incumbent CM Hamza and PTI-backed Parvez were vying for the position.

The runoff election comes after the Election Commission of Pakistan (ECP) conducted polls on 20 provincial seats, which fell vacant after the PTI MPAs were de-seated for violating party guidelines.

In the by-polls, PTI secured 15 seats, taking lead in number games ahead of the CM election, while PML-N managed to bag four seats and independent candidate won in one constituency.

PTI and PML-Q jointly have 188 seats while PML-N's coalition has 179 seats in the provincial assembly.

The law enforcement agencies had made foolproof arrangements in and outside the Punjab Assembly for the smooth conduct of runoff election.

PTI chief Imran Khan accused the Sharif-led coalition government of bribing members of the Punjab Assembly belonging to the PTI in an attempt to change their loyalties.

Taking it to Twitter, the defiant politician said today Lahore was seeing a repeat of the Sindh House horse-trading episode that happened in Islamabad. He said that his party's MPAs were being offered up to Rs500 million each to change their loyalties.

Khan accused PPP co-chairman Asif Ali Zardari as the man behind the act, saying he gets NRO for his corruption and purchases people with looted wealth.

The PTI chief termed horse-trading an 'attack on democracy' and on the moral fabric of society. “Had the Supreme Court taken action and debarred these turncoats for life it would have acted as deterrent,” he said.

On the other hand, PML-N leader and Interior Minister Rana Sanaullah claimed that 50 PTI MPAs could vote for Hamza in the runoff election. However, it didn't happen.