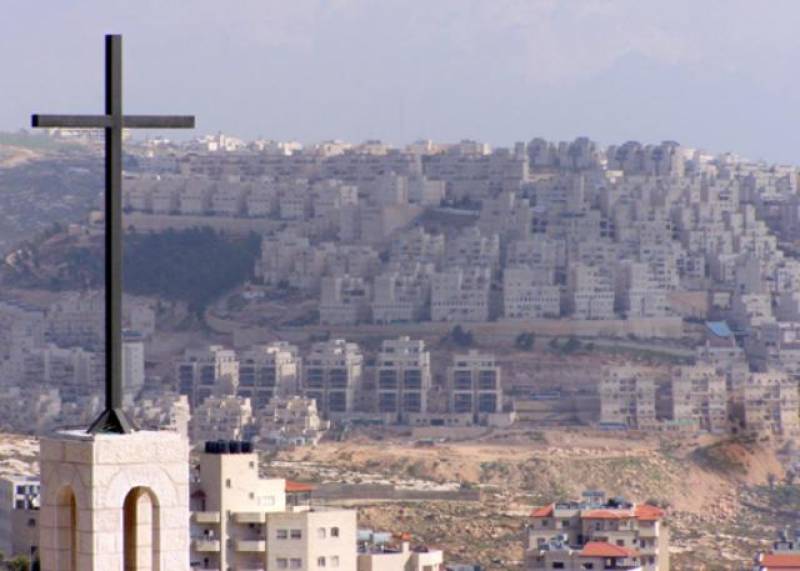 JERUSALEM - A church in Palestine has raised Azaan (Muslim call to prayer) in a bid to protest against a controversial bill which could prohibit mosques from using loudspeakers for delivering call to prayer (Azan) in occupied East Jerusalem.

According to the details, a Christian church in the city of Nazareth made the unprecedented decision on Monday to send out the Islamic call to Prayer from within their own walls.The move was widely welcomed by the Muslim residents in the city.

Azaan was raised under the banner of a protest named “minarets will never be silenced” in which hundreds of Muslims, Christians and Jewish Samaritans raised Azaan sending a clear message to Israel which is all set to ban Azaan in East Jerusalem.

Bishop of the Catholic Church in Nablus Yousef Sa’ada condemned the Israeli attempt to silence the athan, noting this is a “sign of the [Israeli] occupation’s ethical, moral and political bankruptcy.”

The move came days after an Arab member raised Azaan in Israeli parliament for the same reason to protest against the bill purported to ban Azaan.

The controversial bill that has got the backing of Israeli PM has opened up a new debate in the country with many Palestinians arguing that it would violate the religious freedom of the citizens.

On Saturday, the Israeli Ministerial Committee for Legislation approved the anti-Adhan bill before it goes to the Knesset, where it then must pass three rounds of voting before becoming law.

Following the widespread criticism, Israel is reportedly mulling over blocking the anti-Azaan bill for fear of more protests and call for ban on Israeli Siren that announces Shabbat (on Saturdays) on the same standards.