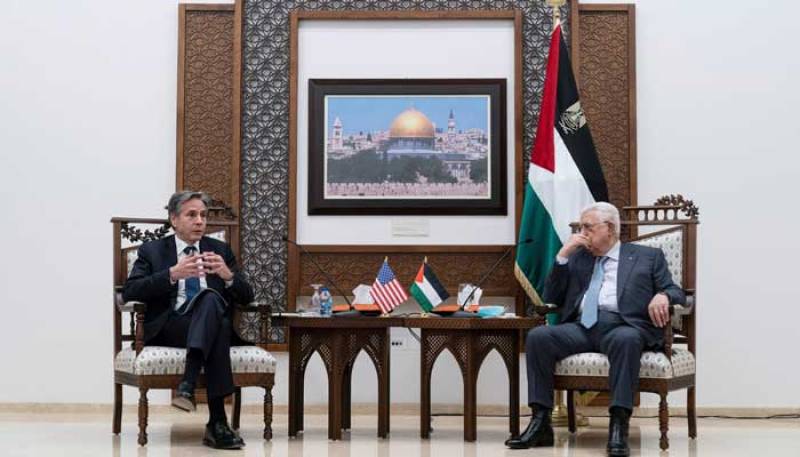 US Secretary of State Antony Blinken announced on Tuesday that Washington would provide aid for rebuilding Gaza that faced massive Israeli bombardment before Tel Aviv and Hamas reached a ceasefire agreement.

Blinken, who is in the region on Middle East mission, also pledged to initiate the process for reopening of Jerusalem consulate for Palestinians, around two years after it was closed by former president Donald Trump’s administration, a move that angered Palestine.

The consulate had served as only diplomatic channel of US to the Palestinians.

The state secretary was speaking alongside Palestinian President Mahmoud Abbas in the West Bank city of Ramallah.

He said the United States would provide an additional $75 million in development and economic aid to the Palestinians in 2021, $5.5 million in immediate disaster relief for Gaza and $32 million to UN Palestinian aid agency.

He added that Washington intended to ensure that Hamas, did not benefit from the humanitarian aid.

The US official began his regional visit in Jerusalem, where he held talks with Israeli Prime Minister Benjamin Netanyahu, who while talking to reporters threatened that a "very powerful response" will be given if Hamas fired rockets.

The ceasefire truce, brokered by Egypt and coordinated with the United States, came into effect on Friday after 11 days of the worst violence by Israel against Palestinians in years.

"We know that to prevent a return to violence we have to use the space created to address a larger set of underlying issues and challenges," Blinken said.

"And that begins with tackling the grave humanitarian situation in Gaza and starting to rebuild."

Blinken further said reopening the US Consulate General in Jerusalem would be "an important way for our country to engage with and provide support to the Palestinian people".

The Trump administration had merged the consulate with the US Embassy in Israel in 2019, two years after it recognised Jerusalem as Israel's capital and later shifting the embassy there from Tel Aviv.

Palestinian PM Abbas thanked the US "for its commitment to the two-state solution (and maintaining) the status quo on the Haram al-Sharif".

Abbas also thanked Blinken for what he called American support "for the preservation of (Palestinian) residents of ... Sheikh Jarrah," an East Jerusalem neighbourhood where Palestinians faced forceful eviction that led to violence in Al-Aqsa Mosque and then in Gaza.

Soon after the Blinken-Netanyahu press conference, Turkish news channel TRT World fact-checked what the Israeli prime minister and the US secretary of state said about the latest Israeli bombing of Palestinian cities.

"Are the 'partners in crime' telling the truth?" TRT World asked, and said that US Secretary of State Anthony Blinken’s press conference with Israeli PM Benjamin Netanyahu followed a predictable script. Here are three times the US turned a blind eye to Israel’s crimes, the news channel said.