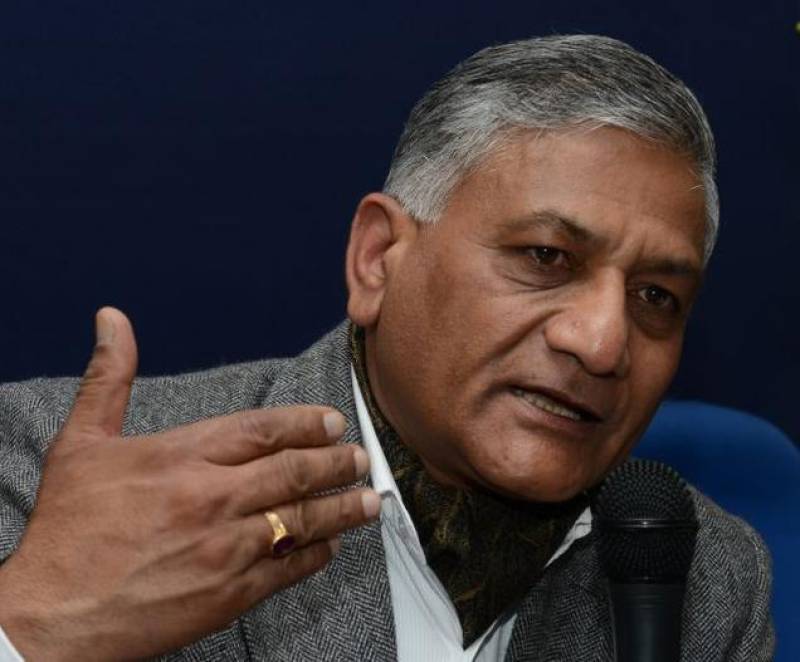 NEW DELHI (Web Desk) - Former Indian Army chief VK Singh used the analogy of 'a dog being stoned' to argue that the Narendra Modi-led central government cannot be blamed for the burning alive of two Dalit children in Haryana.

"Here it was a failure of the (local) administration.

After that it comes on the (Central) government.

So in everything, (to say that if) someone throws a stone at a dog, the government is responsible – it is not like that," said VK Singh, who serves as the Union Minister of State for External Affairs, in footage aired on television channels.

"Don't connect the government with it.

It was a feud between two families. The matter is being inquired into," Singh said in Ghaziabad in Uttar Pradesh, the constituency he represents in Parliament, while referring to the burning alive of the Dalit family in Haryana's Faridabad which left two toddlers dead earlier this week.

The crude analogy drew sharp criticism from the Indian media and prompted the political opposition, including the Congress party, to demand for Singh's ouster as Union state minister.

"General V K Singh has insulted not only the entire Dalit community of this country but all Indians.

It reflects the mindset of the Modi government which insults Dalits, which insults the minorities and looks down upon the people who are poor and downtrodden,” Congress spokesman Randeep Surjewala, demanding that Prime Minister Narendra Modi sack Singh and tender an apology on his behalf.

But the reaction forced Singh to later clarify his statement, claiming that he did not intend to draw an analogy between the Faridabad incident and stoning of a dog.

Singh is not the first politician from the right-wing Bharatiya Janata Party (BJP) to make use of insensitive analogies when speaking about incidents involving minority communities.

In July 2013, Narendra Modi kicked up a storm of controversy when he compared victims of anti-Muslim violence in Gujarat state to puppies run over by a car.

Also known as untouchables, Dalits are considered to be at the bottom of India's caste system.

Dalits, who make up nearly 20 per cent of the Indian population, suffer widespread discrimination in Hindu-majority India despite various laws enacted to ban caste-based discrimination.

Opposition and critics have blamed the Modi-led BJP government for growing intolerance and communal tensions in the country.