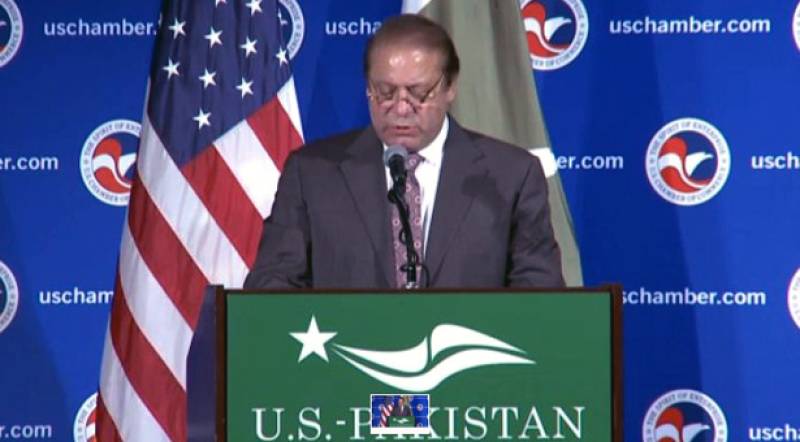 WASHINGTON (Staff Report) - Prime Minister Muhammad Nawaz Sharif has invited the US investors to tap the potential of investment opportunities in Pakistan.

Speaking at a Business Forum organized by the United States-Pakistan Business Council in Washington, he said Pakistan offers some of the most attractive investment regimes to foreign entrepreneurs in the world.

The Prime Minister said he is keen to see Pakistani products reach out to the US markets. He said increased trade would help strengthen ties between the two countries.

Nawaz Sharif, who is in Washington on a four-day official visit, shared with the US entrepreneurs the improved security situation in the country.

He said the current year witnessed lowest number of terrorist attacks as compared to 2007.

The Prime Minister said per capita income has increased by twelve per cent, fiscal deficit has lowered, while revenues have increased by thirty-three percent, foreign exchange reserves have risen considerably, while inflation is at its lowest.

He said his government is working on numerous projects to end power load-shedding by 2018.

He said the project would also benefit the entire region and help boost trade and economic cooperation between the regional countries.

Addressing the US-Pakistan Business Council, Pakistan's Ambassador to the United States Jalil Abbas Jilani has said environment is conducive for investment in Pakistan.

The ambassador said the Business Council will help promote bilateral and trade relations. He said next year's session of the council will likely be held in Pakistan.