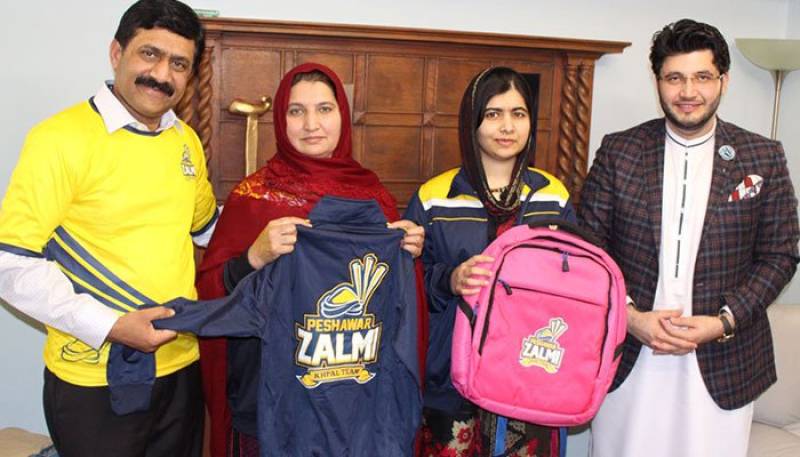 KARACHI -  Ahead of its next season, the Pakistan Super League team Peshawar Zalmi on Friday nominated the Nobel Laureate Malala Yousuf Zai as the team's mascot and ambassador.

Peshawar Zalmi team owner Javed Afridi met Malala Yousufzai and her family in the UK and presented them with Peshawar Zalmi merchandise. He also mentioned meeting an APS attack survivor.

Afridi said that Malala will be the face of Peshawar Zalmi in the upcoming season and will also be cheering for the team during the tournament in Dubai.

“It is an honour for us to be associated with Malala Yousafzai who has made Pakistan proud by winning the Nobel Prize. PZ Foundation will also support Malala’s cause for girls’ education in Pakistan and in other countries,” said Javed Afridi after meeting Malala and her family.

Afridi also presented Peshawar Zalmi’s official jacket to the 19-year-old Malala, the youngest ever Nobel Prize Laureate, and only the second Pakistani to win the prestigious award.

“Malala has always been a great supporter of Peshawar Zalmi, and this year she will be the face of our team, an ambassador of our team,” Afridi said.

“To all the Peshawar Zalmi fans, I am also one of you,” she said in the video message received by Geo.tv.

“We are all supporting this team because we are proud of our Pashtun culture, Pashtun tradition and Pashtun nationality. We stand for peace and unity in the region. Please come forward and support the team,” she said.

The second edition of Pakistan Super League will be played from February 9th to March 7th.