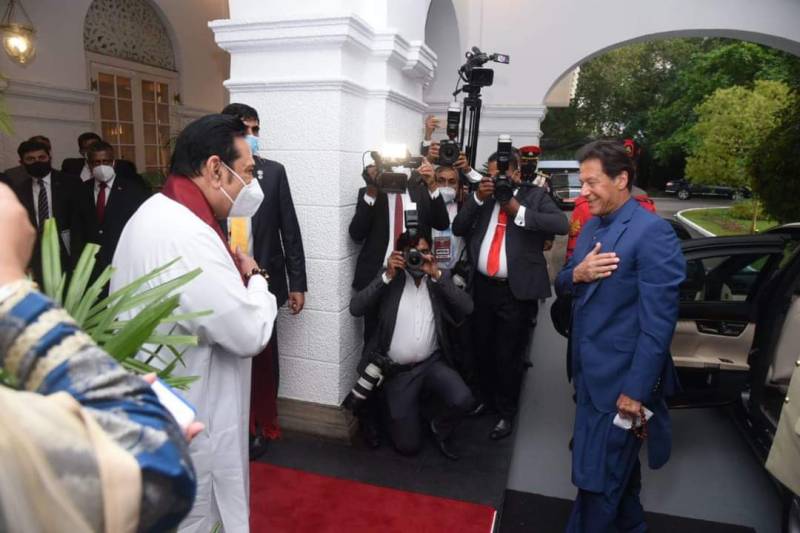 COLOMBO – Prime Minister Imran Khan had extensive consultations with Sri Lankan Prime Minister Mahinda Rajapaksa at the Temple Trees (Prime Minister’s Office) during his first ever visit to the island on Tuesday.

​The two leaders held wide-ranging discussions with a focus on reinforcing a broad-based and enduring partnership between Pakistan and Sri Lanka to advance the shared objectives of peace, stability and economic prosperity in South Asia.

​The two leaders reaffirmed their resolve to work together across a broad range of areas. They acknowledged the immense opportunities and vast potential for mutually beneficial collaboration in the areas of trade and investment, IT and human resource development, agriculture and science and technology, security and defence  cooperation, and culture and tourism.

Appreciating the rich Buddhist heritage of Pakistan and existence of great potential for religious tourism, it was agreed to enhance mutual collaboration including through sharing expertise in the hospitality industry, training and capacity-building.​

During our bilateral discussions earlier this evening, Prime Minister @ImranKhanPTI and I agreed to work closely towards enhancing our bilateral cooperation in the economic sector and a number of other areas including trade, investment, science, technology, defense and education. pic.twitter.com/7PHCWvTXOj

​Both sides expressed satisfaction at the close cooperation between the two countries at multilateral fora and resolved to further deepen strategic communication and coordination at all levels.

It was also agreed to keep the momentum of high-level exchanges between the two countries.

The two sides noted that both Pakistan and Sri Lanka have done relatively well in handling the unprecedented COVID-19 pandemic. In the international context, the importance of Prime Minister Imran Khan’s “Global Initiative on Debt Relief” for developing countries to mitigate the adverse socio-economic impacts of the pandemic was highlighted.

​Prime Minister Imran Khan underscored Pakistan’s commitment to peace and stability in the region. The Prime Minister also underlined the imperative of constructive engagement by all sides to promote a political solution to the conflict in Afghanistan.

The Prime Minister emphasised the importance of resolving disputes through dialogue and promoting the vision of peace, progress and prosperity in South Asia and beyond.​

​The two sides reiterated their commitment to the principles and objectives of the SAARC Charter and agreed on the importance of taking forward the SAARC process for regional cooperation.

Prime Minister Imran Khan expressed deep appreciation and sincere gratitude to Prime Minister Mahinda Rajapaksa for the warm welcome and gracious hospitality accorded to him and his delegation in Sri Lanka.

The two leaders witnessed the signing ceremony of important MOUs on cooperation in the fields of tourism, investment, education, and technology.