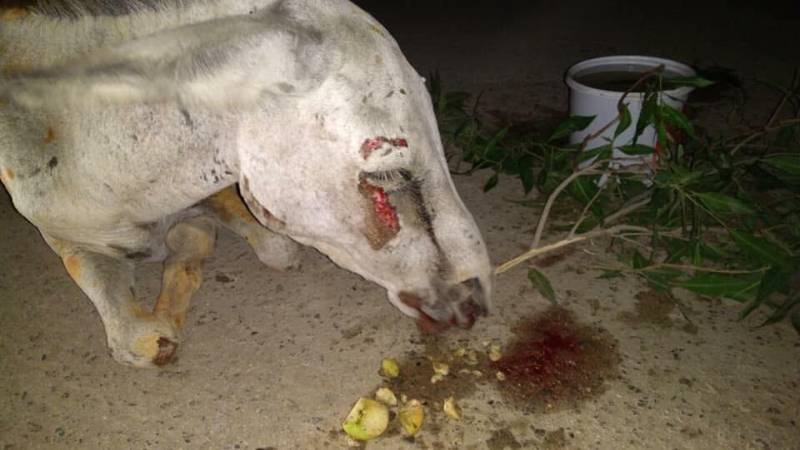 KARACHI - A baby donkey, who was brutally beaten to death by charged workers of a political party in the Sindh capital to mock another group’s electoral symbol last week, passed away on Monday, two days before the general elections.

The demise of the victim of the political violence was announced by an animal rescue foundation which had taken him into its custody after he was found in critical condition in a Karachi's area.

Chundrigar Foundation (ACF) last Monday said they found a donkey beaten to pulp, punched in the face and abdomen several times, nose broken, kicked all over his body until he collapsed, tied to a pole and having a car rammed into him constantly.

Today, the organization shared a post on Facebook, announcing the death of what it called him a "Hero". It states, "He [the donkey] was doing a lot better until yesterday, he managed to stand up on his own, eat powdered food although he had a broken jaw, and drink water on his own".

"However, this morning, his blood pressure was too high, his temperature kept fluctuating hence he was under constant observation, he started bleeding from his nose and he couldn’t breathe properly anymore. His internal injuries due to the violence he faced, were too much for him to bear."

The foundation also slammed the humans' behaviour towards animals, saying, "Shame on us for doing this to him and not being able to curtail this menace of torture and abuse of animals and human beings alike".

"We have to think and act upon this, there cannot be and should not be more Heroes who suffer at the hands of humans," it concluded.