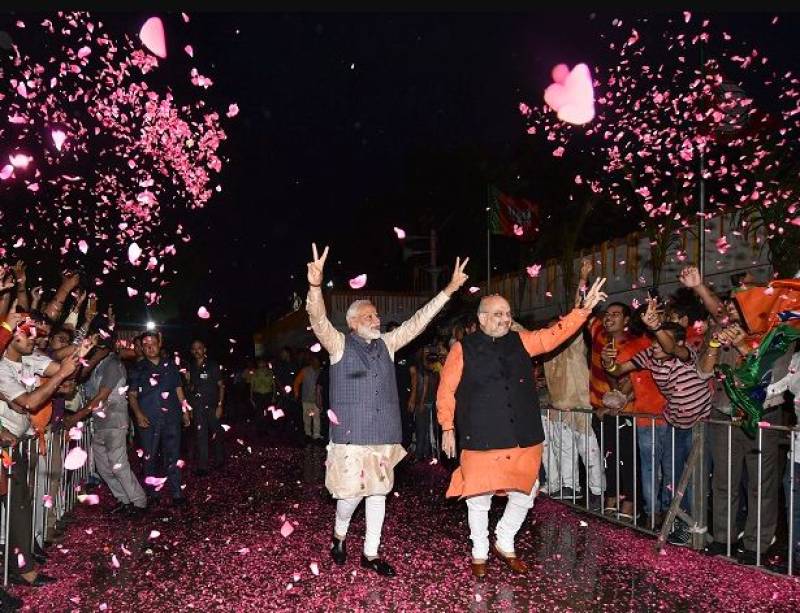 In his victory speech on Thursday, Modi expressed that a new India was being built in which the affluent class would contribute.

"We are now building a new India and the first thing to end in this New India will be this caste system that holds us back and divides us. From here on there will only be 2 castes, one caste is 'poor' and the other caste is of those who will contribute in every smallest way possible to help those who need to be brought out of poverty," he said.

The BJP leader said biggest turnout has been in this election and that too in temperatures of more than 40 degrees across the country, in this burning summer heat.

The premier expressed that today's verdict was not just historic in India, but it was historic worldwide.

Modi continued that there were many state elections too, congratulating those who have been elected in the respective states.

I salute them and the federal structure of India, he observed. The BJP leader expressed that BJP was a special party. adding that Nothing stops us [BJP].

Narendra Modi asserted that this win was not Modi's win adding that it is the victory of the earnest and honest Indian.

"It is the victory of those farmers who work night and day, through blood and sweat so that we get our meals. It is a win for that woman in rural India who waited for ages just to get a toilet. It is a win for those who sat in darkness for decades just to see the luxury of a light bulb. This is their victory," he shared.

The final count for the polls is underway, however, BJP coalition is leading with Indian National Congress trailing behind. 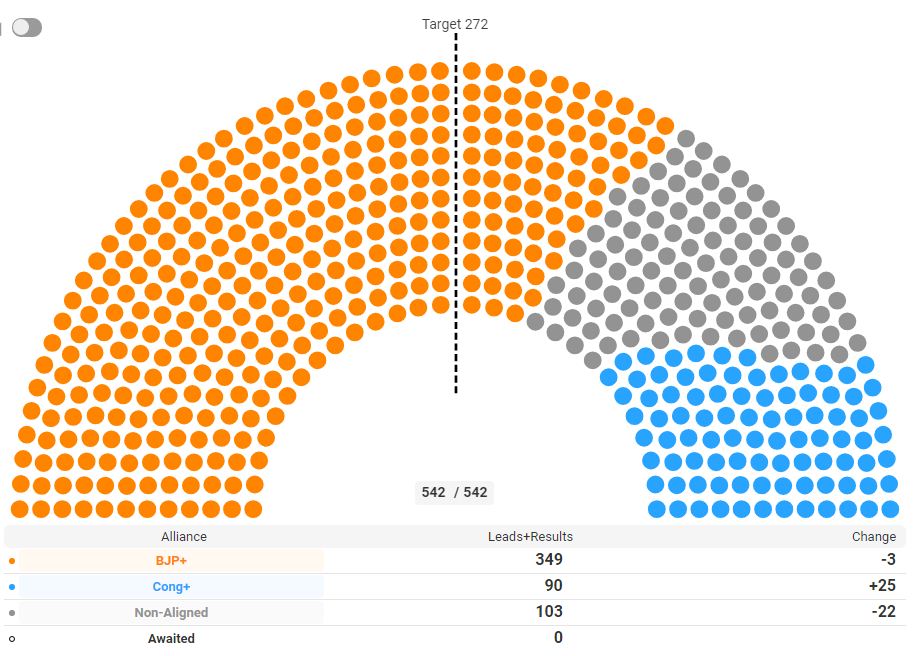 Trends are expected to be known by noon and final results are due by Thursday evening.

Congratulations on the remarkable win in Andhra Pradesh. Best wishes to you for a successful tenure.

Rahul Gandhi, president of the Congress party, congratulated Prime Minister Narendra Modi for his spectacular re-election and asked him to "take care of the interests of the country".

The 48-year-old also conceded defeat in Amethi, asking political opponent and BJP leader Smriti Irani to "nurture with love" the constituency that has been with his family for four decades.

Mr Gandhi has reportedly offered to resign as President of the Congress. When asked about this, he told NDTV "Can this be between me and the Working Committee (the party's top decision-making body?"

The ruling BJP’s Pragya Singh Thakur won from Bhopal; she is currently out on bail and facing trial for her alleged involvement in blasts at mosques, dargahs and attack linked to Samjhauta Express blasts that killed about 60 Pakistanis.

In India, a controversial candidate like Thakur, facing allegations of involvement in terror activities will become MP in a few days contrary to neighboring country Pakistan, where the election watchdog refused to allow Hafiz Saeed’s Milli Muslim League (MML) to contest elections, for allegations, it has links to a group blamed for deadly terrorist attacks in the Indian city of Mumbai in 2008.

The MML was founded in 2017 by the Jamaat-ud-Dawa (JuD) charity, which officials allege has links to Saeed.

The decision to reinstate the ban was made during a crucial meeting of the National Security Committee (NSC) which was convened in the aftermath of Pulwama attack and the allegations hurled by India against Pakistan in this regard banned the charity in February.

Six of the seven pre-counting exit polls had presented that the National Democratic Alliance (NDA), led by Modi’s Hindu nationalist BJP will secure a simple majority.

Earlier, Modi was given clean chit in anti-Muslim Gujarat riots in 2002, which ended with 1,044 dead, 223 missing, and 2,500 injured. Modi also took political gains by creating war hysteria against neighbouring Pakistan after a suicide car bomb killed 40 Indian police in the contested Kashmir region in February.

In India, across parties, of the 521 Lok Sabha members of parliament (MPs), 106 (20%) are charged with serious offences such as murder, inciting communal disharmony, kidnapping and crimes against women.

As many as 55 percent of these MPs are from the BJP (92), compared with 2 percent from Congress (7). The BJP had 98 MPs facing criminal charges at the beginning of the term, 35 of which were serious charges.