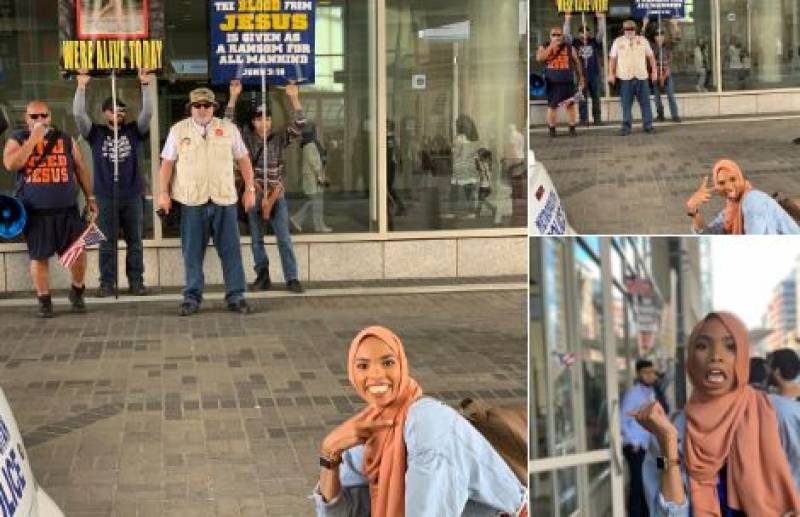 WASHINGTON DC - A Muslim woman from Washington, D.C., is being widely praised online for her response to a group of anti-Muslim protesters at the Islamic Circle of North America convention over the weekend.

In a photo that has garnered tens of thousands of likes on Instagram and Twitter since Sunday, Shaymaa Ismaa’eel, 24, can be seen smiling and holding up the universal peace sign as she poses in front of a group of protesters holding signs with messages such as “Islam is a religion of murder" outside the convention.

“Kindness is a mark of faith. Those who aren’t kind have no faith,” Ismaa’eel said in an Instagram caption, quoting the Prophet Muhammad.

“On April 21st I smiled in the face of bigotry and walked away feeling the greatest form of accomplishment,” she tweeted.

On April 21st I smiled in the face of bigotry and walked away feeling the greatest form of accomplishment. pic.twitter.com/Dbrtk7MDAw

After Shaymaa shared the smiling pictures on her Twitter handle, Praise quickly followed with supporters calling for the photo to be included in a museum.

Ismaa’eel, who attended the Islamic Circle of North America convention on Saturday, shared with the American daily BuzzFeed News in an interview that she felt prompted to counter the “hateful” protest with kindness and peace after the group of men began to make others at the convention feel uncomfortable.

"Most people were very upset and didn't know how to embrace their presence. Some teens were getting upset, trying to approach the men,” she told the publication. Ismaa’eel said the men told her and other attendees that they were going to go to hell because of their religion.

"I kept thinking about them during the workshops," Ismaa’eel said. "'What if we had a loudspeaker so they can hear the beautiful things we’re learning about our beloved prophet?!' I kept thinking to myself."

Ismaa’eel said that is when she decided to walk outside in front of the protesters as they continued to yell “their hateful speech” and take a photograph, despite security telling her she could not.

“I asked the police officer if I could stand at the curb in front of the men. The officer said 'no', and at that moment I felt like the biggest rebel,” she told BuzzFeed. "I smiled so hard in the picture and the man [started] directing his speech toward me. Silly things like 'your face should be covered.'"

The photo immediately went viral on social media, racking up over 62,000 likes on Twitter and 77,000 likes on Instagram as of Tuesday afternoon.

Ismaa’eel added that “everyone is proud of me honestly while praying for my safety.”

"My mom messaged me when my post was at [3,000 likes] saying 'Your ICNA post is all over the place. Please be aware of your surroundings,’” she continued. “She’s definitely nervous because it’s clear people like that typically aren’t the kindest."

But Ismaa'eel said the overwhelming response she’s received from the online community over the photographs is “making me happy to know that the youth can see someone being unapologetic in the face of people who hate their religion."