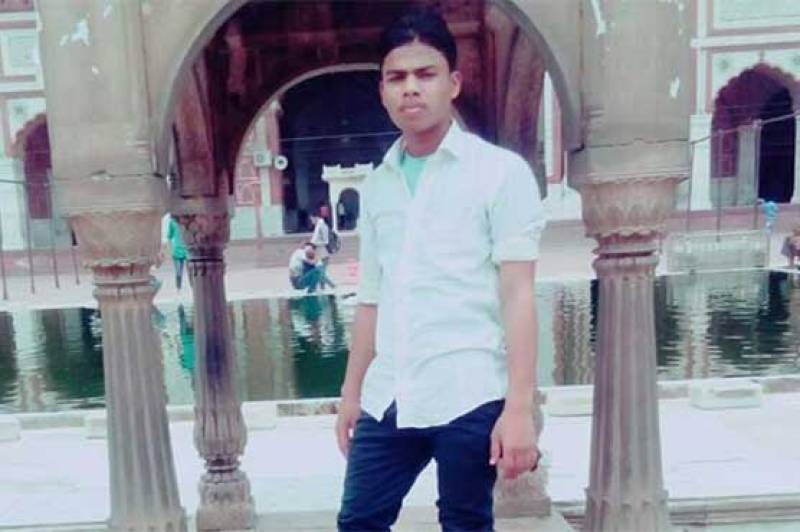 GUJRAT - Indian police said on Saturday that a man was arrested in connection with a stabbing that led to the killing of a Muslim teenager on suspicion of carrying beef.

According to reports, a Muslim family was on board a Mathura-bound train on Thursday when an argument over a seat turned into religious slurs and triggered a mob attack on family members returning home from Eid shopping.

The angry mob comprising some 15 to 20 men pulled out knives and set upon the family while making anti-Muslim comments and alleging that one of the packets they were carrying contained beef.

The skirmish turned brutal and led to the killing of 16-years-old Junaid Khan who was a student of Islamic studies in Surat, Gujarat. Junaid's brother Md Sakir, who boarded the train at Ballabgarh after being informed over the phone by one of them, was also allegedly stabbed and was admitted to a hospital.

ALWAR- A Muslim man who was attacked by Hindu vigilantes while transporting cows in India breathed his last, police ...

Junaid's elder brother Hashim claimed that the trouble started when a group of 15-20 people boarded the train at Okhla and asked them to vacate the seat, which led to an argument.

"They were pointing at a packet which had food and saying we should not be allowed to sit since we were carrying beef," Hashim said and added that the mob ignored their repeated pleas that they were not carrying any beef.

On the other hand, Ajay Kumar, a government railway police official confirmed that the fight started over seats.

"We are looking into the matter and we have arrested one of the accused who is a 35-year-old old man from (northern state of) Haryana," he said.

Indian Muslims are living under a constant threat ever since ultra-nationalist Narendra Modi-led BJP rose to power in 2014.

In the last two years, nearly a dozen Muslim men have been killed across the country on suspicion of eating beef or smuggling cows, despite the fact that Modi took a swipe at the cow protection vigilantes and urged a crackdown against groups using religion as a cover for committing crimes.

During his address in the national capital last year, Modi expressed that most of the people involved in such activities were anti-social and were running their shops in the name of cow protection.

“Some people who have opened their shops in the name of cow protectors, I feel anguished by them. Gau sevaks and Gau protectors are both very different,” Modi said.

“If we prepare a dossier of these individuals I am sure we will be able to find out that 70-80% of these people indulge in anti-social activities that aren’t acceptable in normal society,” Modi said.

Modi took to Twitter as well about his stance.

The sacred practice of cow worship & the compassion of Gau Seva can’t be misused by some miscreants posing as Gau Rakshaks.

Misdeeds of some, posing as Gau Rakshaks are doing a great disservice to the noble deed of Gau Seva, as practiced by Bapu & Vinoba Bhave.