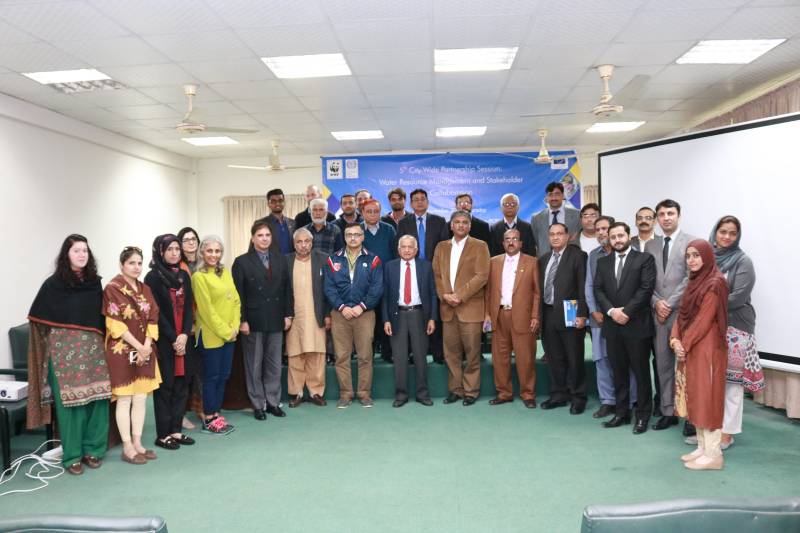 LAHORE - Lahore may face huge water shortage by the year 2025, if the depletion of groundwater continues with the same pace. The absence of national water policy and rapid growth in urbanization are the big factors behind this threat.

The alarming situation was disclosed on Thursday during a session conducted by World Wide Fund for Nature-Pakistan (WWF-Pakistan) under the project titled International Labour and Environmental Standards (ILES) implementation in Pakistan's Small and Medium Enterprises (SMEs) in collaboration with Pakistan Council of Research in Water Resource s(PCRWR), Irrigation Research Institute (IRI), Irrigation Department and Government of Punjab.

The moot was attended by experts and different stakeholders including the representatives of Irrigation Research Institute (IRI), Punjab Irrigation Department (PID) and others.

The participants were informed that the groundwater level of Lahore is depleting at a rate of 2.5 to 3 feet per year. They said that that the water table of central Lahore had fallen below than 130 feet which means that it will drop below 230 feet by the year 2025.

Currently, more than 160 million litres of groundwater is extracted per day thru hand pumps, motor pumps and tube wells in addition to the amount of water used for the industrial and recreational purpose.

A case study on river Ravi was also shared in the session, which highlighted issues around the basin such as ground and surface water quality deterioration, over-abstraction of groundwater, inequitable development leading to increased water stress and increase in waterborne diseases.

According to the experts, the consumption pattern of water in the city was highly unsustainable as it was not just depleting the groundwater but also contaminating the Ravi which is the main source of water recharge in the city.

“This contamination not only threatens individual health but also to economic growth, food security and environmental sustainability in the city,” they sighted. They warned that if the present trend continues then Lahore might be without groundwater by the year 2040.

Experts while discussing the matter also recommended possible solutions for bringing improvement in this regard.

WWF-Pakistan Director General Hammad Naqi Khan said that Pakistan was a water-stressed country and the situation will worsen in the near future. He said that the situation of safe drinking water in rural and urban areas was declining and provision of potable water was a key issue that people were facing. He added that the industrial units around the city were a major factor in contaminating groundwater as they keep disposing water contaminated with copper, chromium, and nickel.

"WWF-Pakistan is committed to protecting the freshwater resources of the country and improving water access, efficiency, and allocation for people and the environment," Khan added.

However, he said that that PCRWR has experimented with rainwater harvesting models on a pilot scale and such artificial groundwater recharge can be a good option in restoring Lahore’s groundwater.

Ghulam Zakir Hassan Sial, Director Irrigitation Research Institute (IRI), Irrigation Department, Government of Punjab, said that the depletion of groundwater has become severe over the years and that the Groundwater Act may help in the restoration of Lahore's groundwater.

Other stakeholders were of the view that the safe drinking water should be made available to the population while the industries need to ensure proper disposal solid and liquid waste. They stressed for immediate actions in making and implementation of the policy before it is too late.