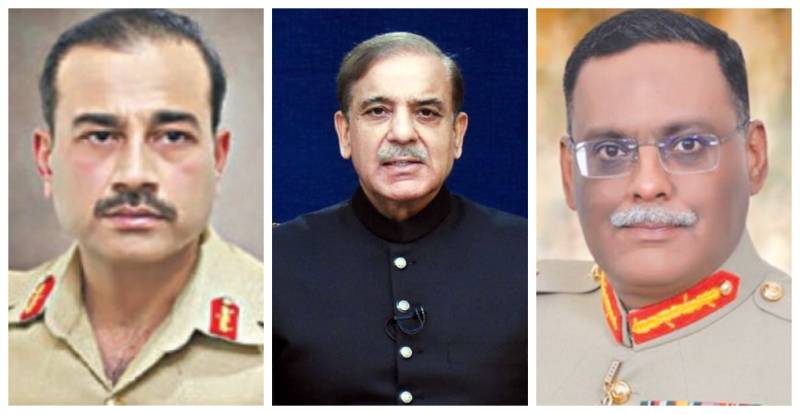 The meetings come minutes after the President Arif Alvi approved a summary sent by the premier regarding appointment of Gen Asim Munir and Gen Sahir Shamshad at two highest positions in the military.

During the meeting, the prime minister congratulated the top generals on their latest appointments.

Chief of the Army Staff (#COAS) designate, #LtGenAsimMunir Munir, called on #PMShehbazSharif at #PMHouse, #Islamabad, who congratulated the incoming #ArmyChief and expressed his best wishes for his new responsibilities.

The COAS and CJCSC also called on President Arif Alvi at the Aiwan-e-Sadar where matters of mutual interest were discussed.

Lieutenant General Syed Asim Munir was nominated as next Army Chief by Prime Minister Shehbaz Sharif on November 24, 2022. He was named for the coveted post for being the most senior officer in the Pakistan Army after outgoing Army Chief Qamar Javed Bajwa.

Gen Munir, who recently served as Quartermaster General in the Pakistan Army, entered the service via the Officers Training School (OTS) programme in Mangla and was commissioned into the 23rd Battalion of the Frontier Force Regiment.

Lt-Gen Munir commanded troops in the Force Command Northern Areas as a brigadier under Gen Bajwa, who was then Commander X Corps. He was appointed DG of the Military Intelligence in early 2017 and then ISI Director General in October 2018.

He is a 'Hafiz-e-Quran' who memorised the Quran during his posting in Saudi Arabia as Lt Colonel.

Lieutenant General Sahir Shamshad Mirza has been shortlisted as Chairman of the Joint Chiefs of Staff Committee ...