Qureshi calls on world to engage with Taliban 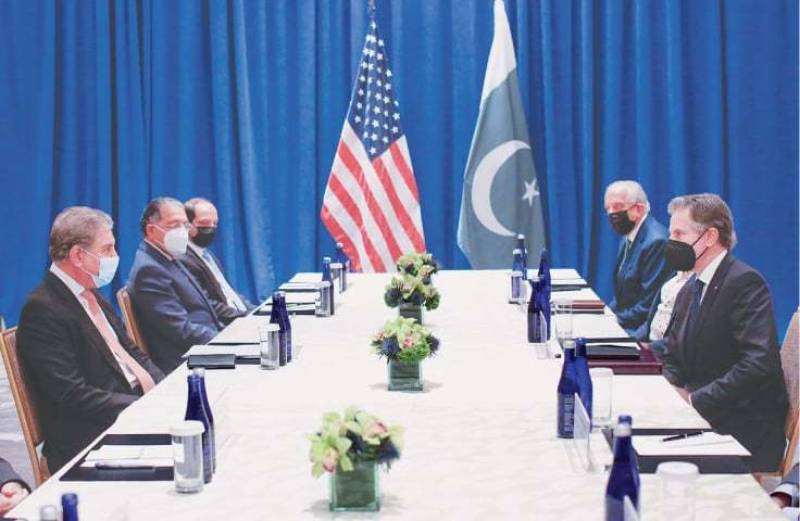 NEW YORK – Foreign Minister Shah Mahmood Qureshi Thursday said that the world should not repeat the mistake of disengaging with Afghanistan.

He expressed these views during a meeting with US Secretary of State Antony Blinken in New York on the sidelines of the 76th United Nations General Assembly session.

This is the first meeting between the two top diplomats and as the foreign minister’s statement after the meeting showed, it focused on Afghanistan.

Opening his meeting with Blinken, Qureshi said, “We have to find a way of collectively working to achieve our common objective, which is peace and stability.”

The foreign minister, according to a press release issued by Pakistan’s foreign office, said at the meeting that close engagement between Pakistan and the United States had always been mutually beneficial and a factor for stability in South Asia.

He reiterated Pakistan’s desire for a balanced relationship with the United States that was anchored in trade, investment, energy and regional connectivity.

Shared w/ @SecBlinken importance of int’l community holding Taliban to their commitments; also for the same community to recognise moral obligation to help the Afghan people with growing humanitarian crisis. The world should not repeat the mistake of disengaging with #Afghanistan https://t.co/a8jEmzzmk7

He stressed that only a stable and broad-based government in Afghanistan, which reflects its diversity and preserves the gains made by the country since 2001, would be able to ensure that Afghan territory is never exploited by transnational terrorist groups ever again.

Noting that a new political reality had emerged in Afghanistan, the foreign minister said while the Taliban should be held to their commitments, the international community has a moral obligation to help the Afghan people deal with the growing humanitarian crisis in Afghanistan.

He hoped that the world would not repeat the mistake of disengaging with Afghanistan.

The foreign minister highlighted the grave human rights situation in Indian Illegally Occupied Jammu and Kashmir, and underscored the importance of resolving the Kashmir dispute for lasting peace and stability in South Asia.

During the meeting, Secretary Blinken appreciated Pakistan’s support for the evacuation of the US citizens and other nationals from Afghanistan, and its continued efforts for peace in the region, according to the press release.

Blinken said he believed the world was united on pressing the Taliban after speaking with Pakistan, China and Russia, key players with Afghanistan´s new rulers.

I met with Pakistani Foreign Minister @SMQureshiPTI about our bilateral cooperation and Afghanistan’s future. pic.twitter.com/zF4TVSqixF

“I think there is very strong unity of approach and unity of purpose,” Blinken told reporters.

Blinken reiterated US priorities for the Taliban including allowing Afghans and foreigners to leave, respecting the rights of women, girls and minorities, and not letting Afghanistan be used again by extremists such as Al-Qaeda.