At UN, Pakistan slams Indian sponsorship of militancy and aggression in South Asia 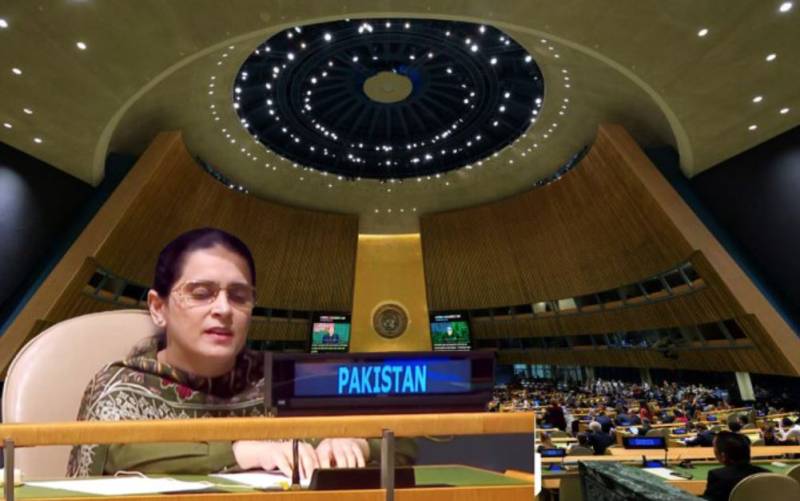 NEW YORK – Pakistan hits back at India, quoting instances of the Indian sponsorship of terrorism and aggression against all its neighbours, saying New Delhi becomes the principle perpetrator, sponsor, financier, and abettor of terrorism in South Asia.

After Prime Minister Shehbaz Sharif wrapped up his maiden address to the United Nations General Assembly (UNGA) on Friday, in which he criticized Modi led government over atrocities in occupied Kashmir, the Indian delegation exercised its right to reply.

In his speech, the first secretary of the Indian Mission to the UN, Mojito Vinito leveled allegations at Pakistan for sheltering terrorists behind the horrific terror attacks and accused it of sponsoring cross-border terrorism.

Pakistani Mission to the UN said the myth of terrorism created and propagated by India, cannot and will not hide the stark reality that people of Pakistan, the Indian Illegally occupied Jammu and Kashmir (IIOJK) and its own minorities are victims of its state-sponsored terrorism.

She mentioned instances of the Indian sponsorship of terrorism and aggression against all its neighbours that makes New Delhi the “principle perpetrator, sponsor, financier and abettor” of terrorism in South Asia.

New Delhi was funding and supporting terrorist groups like the Tehreek-i-Taliban Pakistan (TTP) and the Balochistan Liberation Army (BLA) who have killed thousands of innocent people in terrorist attacks in Pakistan, she said.

She continued saying that “Since the Hindutva inspired RSS-BJP government’s unilateral and illegal actions on August 5, 2019, termed as ‘Final Solution’, India’s 900,000 occupation forces in occupied Kashmir — the ‘densest’ occupation in history — have escalated their oppression of 8 million Kashmiri men, women and children in the world’s largest ‘open-air prison”.

Since 1989, India has committed over 0.1 million extra-judicial killings, around 162,000 cases of arbitrary arrests and torture, over 25,000 pellet gun injuries, 11,250 cases of rape and gang rape, and 8,652 unmarked mass graves, attesting to the genocide which is being committed in occupied Kashmir, she said, adding that we fear that these discoveries of Indian crimes are but the tip of the iceberg,” Saleem said.

“If India has nothing to hide, it must grant access to Occupied Jammu and Kashmir to human rights mechanisms, accept a UN Commission of Inquiry and agree to implement the Security Council resolutions,” Saima added.

She also mentioned Islamophobia that has penetrated into the very foundations of the Indian state, where 200 million defenceless Muslims are lynched by cow vigilantes groups.

Recalling the plights of Indian Muslims, she said Citizenship (Amendment) Act, 2019 aims to purge India of its Muslim minority, and is providing a pathway to Indian citizenship for persecuted religious minorities from neighbouring nations.

NEW YORK – Prime Minister Shehbaz Sharif has said that Pakistan wants peace with all its neighbours, including ...

Counselor at the Pakistan Mission to the UN said called out India over Hijab ban, adding that houses and shops of Muslims are being bulldozed, and derogatory remarks against the prophet are being made by the top leadership of the ruling party to hurt sentiments of not only Indian Muslims but also of Muslims across the world.

She said all minorities, including Christians, Sikhs and Dalits, face persecution and churches and gurdwaras are torched by Hindu fundamentalists.