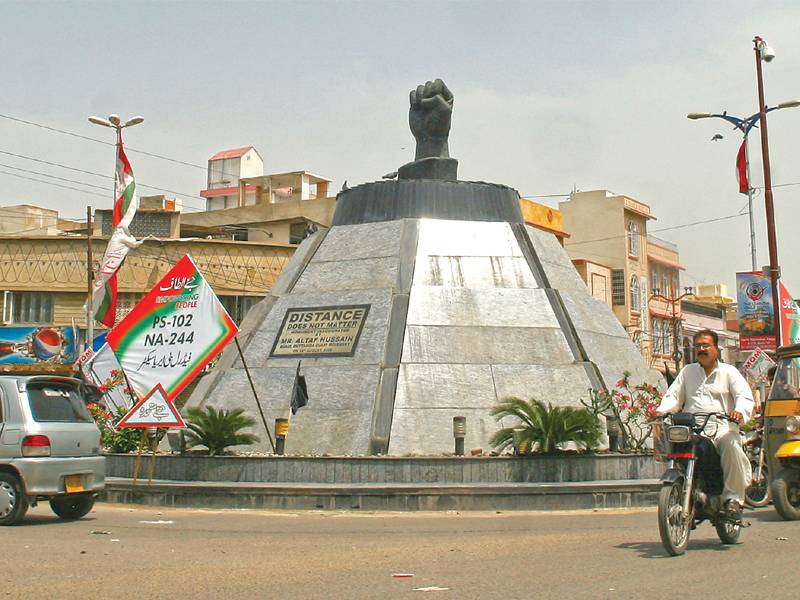 KARACHI (Staff Report) - Posters of MQM chief Altaf Hussain have been removed from several areas of Karachi and Hyderabad.

Police say large pictures of the MQM supremo were removed by ‘unknown persons’ from Mukka Chowk in Liaquatabad area, and from Jinnah Ground. Surprisingly, the move did not draw ire of the party workers, and the situation remains peaceful in Azizababd area, the stronghold of Muttahida Qaumi Movement.

However, no senior leader commented about who had removed Altaf’s pictures.

To Pak Sarzameen Party (PSP) leaders, this is a reaction from the people. But they deny any involvement.

Hyderabad’s Latifabad area was also cleared by the large posters of Altaf Hussain, the MQM supremo who was sidelined by his own party earlier this week.

The recent move comes days after MQM leader Farooq Sattar announced that the MQM was distancing itself due to the violence followed by his provocative speeches. The MQM senior convener also assumed control of the party, which is practically based in Pakistan, but had been controlled over from London for more than two decades. Sattar, in a press conference on Aug 23, said that the decisions regarding the MQM would now be made from Pakistan.

Amir Khan, another senior leader, yesterday also distanced MQM from Altaf’s address to the party workers in the United States.

A day after party leadership stripped him of organisational powers for an indefinite period, the MQM chief allegedly urged the party workers in US to seek help from Israel, India, Iran and Afghanistan. Altaf Husaain reportedly blamed Pakistan Army and other state-institutions for ‘breeding terrorism through terrorist groups’.

Sindh police are however still clueless about the identity of those who removed Altaf Hussain’s decades-old photos and portraits from the Mukka Chowk, outside Altaf Hussain’s residence, and nearby Jinnah Ground where the party was founded.

Till today, the well-known “Mukka Chowk” - decorated with a brown sculpture of a clenched fist that rests atop an inverted funnel in the roundabout - remained plastered with posters of Altaf Hussain.

The famous roundabout is located in Azizabad area, considered as MQM’s bastion in Karachi, close to the party’s headquarters, Nine Zero, residence of Altaf Hussain.