Shahid Afridi in Dubai to secure freedom for jailed Pakistanis 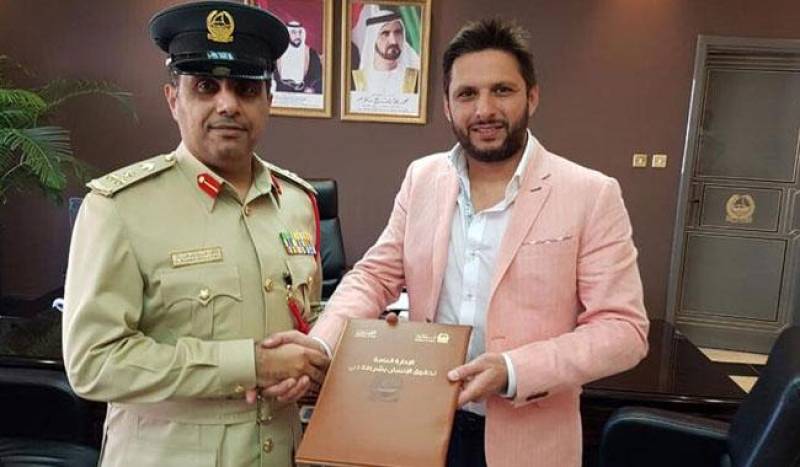 DUBAI - Pakistan’s Boom Boom, through his Shahid Afridi Foundation, has helped secure the release of 30 Pakistani prisoners, who had been detained in Dubai.

Imprisoned for a variety of offences, these prisoners would have likely spent more time behind bars had Afridi not stepped in to use his influence and secure their early release.

In United Arab Emirates, the former T20 skipper met Dubai police head to initiate the process of release of detained Pakistanis as soon as possible.

The star cricketer made the announcement through a Facebook post in which he thanked the Dubai Police Department for their generosity and willingness to help with regard to Pakistani prisoners.

"I am very thankful to the Dubai Police Department, who have been very compassionate and graceful to initiate the release of Pakistani prisoners and to give them a chance to go back to their home country and to rebuild their life afresh," reads a message on Shahid Afridi's official Facebook page.

Afridi, the famous all-rounder has turned to charitable work through his Shahid Afridi Foundation, which aims to provide benefit and relief to the poor of the country.

In his own words, Afridi believes the move gives the freed 30 ‘a chance to go back to their home country and to rebuild their life afresh’.

As his career has winded down, Afridi’s philanthropic activities have gone into overdrive. He has built several small hospitals and community centres in remote areas of the country.

With a population of 1.4 million Pakistanis in the UAE, only a handful are involved in petty crimes. According to senior Ambassador of Pakistan to UAE Moazzam Ahmad Khan rough estimates show that currently there are 1,200 Pakistanis undergoing different jail terms in all UAE jails.