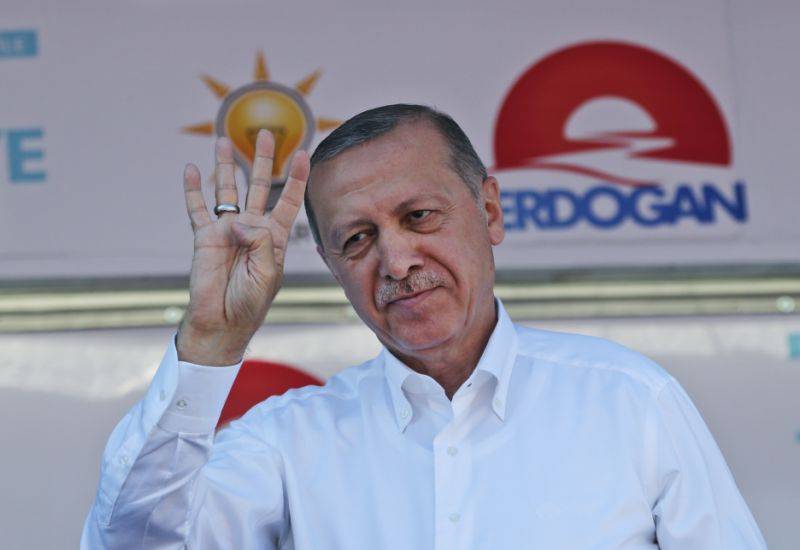 With 97.7% of the votes counted, the electoral board pronounced the 64-year-old as the winner with an absolute majority.

Erdogan, who has led Turkey for the past 15 years, bagged 52.5% of the vote, while the runner-up in the contest, Muharrem Ince, received 30.8% and the only female candidate, Meral Aksener, 7.4%, international media reported.

Speaking on national television, Erdogan said: "The nation has entrusted to me the responsibility of the presidency and the executive duty.

"I hope nobody will try to cast a shadow on the results and harm democracy in order to hide their own failure."

But a shocking fact is that his AK party will have no longer total control on all areas of Turkish political life as it has lost its majority in the parliament.

Addressing thousands of supporters in Ankara, he said: “We will fight even more with the strength you provided us with this election.”

Erdogan reiterated his commitment to “fight terroristic organisations”, “to continue the fight to make the Syrian grounds freer” and to increase the “international prestige” of  Turkey, saying: “Turkey has no moment to waste, we know that.”

Today’s election is the first since Turkey switched to a presidential system of governance after the April 2017 constitutional referendum. The plebiscite effectively split Turkish society in half, as the amendment package passed by a close margin, securing 52 percent of the vote.

The victory allows Erdogan to further consolidate political power and implement the constitutional reforms. The powers in question include the abilities to pick cabinet ministers from outside of the legislature, pass laws by decree, single-handedly declare a state of emergency and launch extraordinary elections. The post of the prime minister is also set to be abolished.

The Turkish opposition, however, sees such changes as a power grab, which effectively destroys the country’s century-old parliamentary democracy. Erdogan’s closest competitor, Ince, vowed that he would lift the state of emergency within 48 hours if elected president and reverse all the constitutional reforms afterward.

“With the presidential system, Turkey is seriously raising the bar, rising above the level of contemporary civilizations.”

Following the failed coup, Turkey has been under a state of emergency for nearly two years and has seen a widespread crackdown on alleged supporters of Gulen. Around 160,000 people have been detained, and thousands of public servants and soldiers have been fired.