A Probe into Pakistan's Defeat in UNHCR Re-elections 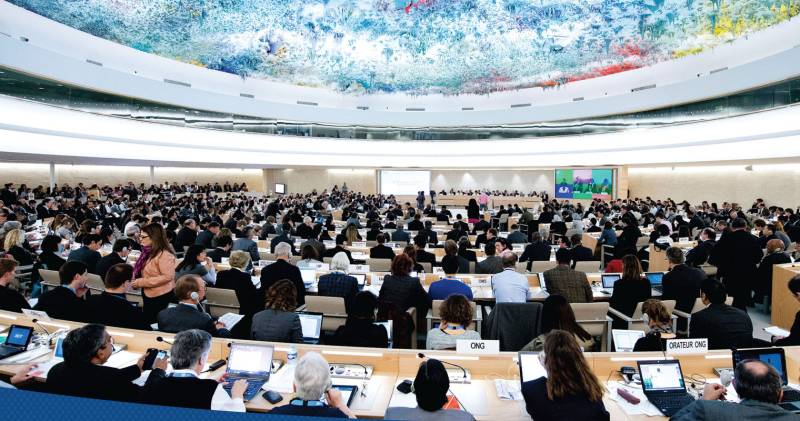 The defeat in the re-elections of the UN Human Rights Council is being viewed as a humiliating failure of Pakistan. However one should try to decipher as to what went wrong. Is it actually a diplomatic failure or is there something more to the whole episode?

The fact that Pakistan had been successfully holding the membership for past three terms and was considering running for the council’s presidency, signifies that Pakistani representatives were riding high on the confidence quotient. Why then despite this confidence, Pakistan ended up losing the seat? Couldn’t it foresee the possibility of losing or was it just simply unimaginable for Pakistan? Was it being overconfident or was it lagging somewhere; may be not enough of lobbying was done before the elections to gather the sufficient support. Who among the member states decided to withdraw their support for Pakistan and left it in a lurch? All of these speculations need to be scrutinized in order to not only find the reasons but to learn from them to avoid the mistakes in the future. However it is quite difficult to disentangle the knots and reveal what and who among these is the real culprit since the whole procedure of casting the votes is done through secret balloting.

Nonetheless the repercussions are manifold. Pakistan is dealing not just with a diplomatic failure but a psychological shock as well. The humiliation has caused Pakistan to lose confidence in international community where Pakistan despite holding the seat for three terms is suddenly not seen eligible for the membership by the majority. It also points to the decline in the international prestige. Most of all Pakistan fears that its voice on the issues related to human rights violation in Kashmir done by India, might not be given due hearing at the international forum. This might weaken Pakistan’s case against India on the Kashmir issue.

Looking at the possible reasons, one commonly being quoted is that the defeat is the result of Saudi’s estrangement in the backdrop of Pakistan’s neutral stance over the Yemen conflict. Although it might sound logical but one also has to keep in mind that GCC states have always had a give and take relationship with Pakistan. Indeed they have been a major block supporting Pakistan on various regional and international issues but simultaneously Pakistan had been returning the favor by committing for their interests more than it possibly could. Pakistan sent thousands of soldiers to safeguard KSA in 1980s. Similarly KSA extended huge financial help for Pakistan’s nuclear program. Hence a single incident of Yemen conflict cannot possibly damage the long history of trust and partnership between the two. In fact there is no concrete evidence that the relationship has fallen victim to the Yemen Conflict. However if one buys the argument that there came a cool patch in the relationship as being dubbed by the Saudi media, then there is some lesson for Pakistan to learn from this. Pakistan needs to work towards mending the relations but not at the expense of its own national security interest. Pakistan should try to convince the Saudi counterparts about the genuine inability to spare forces as they are already engaged in FATA, as well as along the border of Afghanistan, and in war against terrorism.

It is also said that Pakistan is being targeted for legalizing the hangings of convicted criminals, which didn’t sit well with the proponents of Human Rights. In this context again two main points are needed to be kept in mind; One, executions are not prohibited under any law, they are only largely discouraged. Otherwise membership of states like KSA should have been revoked long time ago for the record number of executions which are continuously on the rise and where punishments like flogging and stoning are considered legal and effective punitive measures. Secondly, despite having a long history of sufferings at the hands of terrorists, Pakistan lifted the moratorium on death penalty only early this year after the devastating attack on a School in Peshawar.

Hence the international community needs to realize that Pakistan is not doing anything illegal or unjustified rather it should support Pakistan for taking concrete measures against terrorist elements. Therefore this very fact cannot and should not by any means be used against Pakistan at forums like Human Rights Council.

Also, GCC states only amount to 6-7 countries in a huge pool of 193 member states of the council, out of which Pakistan could hardly get 105 votes. This shows that either Pakistan’s performance on the whole has been deemed unsatisfactory collectively by most of the nations or Pakistan did not do enough lobbying for the elections, an important area that should not have been neglected.

Only KSA’s estrangement, if there is any, cannot be taken as a sole reason behind the defeat. Pakistan needs to work on the lobbying dimension too. No one can deny that Pakistan is the only country hosting largest number of refugees. Therefore, Pakistan can reclaim its position by highlighting this point more effectively.